Journal is a dialog based narrative story game by Locked Door Puzzle released in 2014.  The story follows a young girl who has discovered that the pages in her journal have gone blank and she sets out to try to find what happened to them.  The game plays out as she talks to different characters in life, and asks them about the journal, and different interpersonal conflicts arise–her mother, her father, her classmates, teacher, priest.  The game is a little bit of exploration as she walks around a larger area and finds new people to talk to with each level of the game, but mostly the game comes down to dialog choices.  When her best friend accuses her of not being a good friend, does she apologize or deny it?  When her teacher asks her if she cheated on a test does she own up to it or cover it up?  Making the “right” choice doesn’t always produce a happy outcome–as with many things in life.  As the game goes on she’s always kind of feeling her way around things that she doesn’t really want to remember. 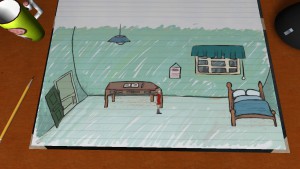 I thought the idea for this game was interesting.  I liked how it didn’t go the straightforward After School Special route where if you do the right thing then everything will turn out happy for you.  I thought the art was nice enough, and the voice acting good.  I picked up on the sense that the narrative was kind of feeling around the empty spaces where other events in her life would be revealed to be, which I thought was an interesting technique.

But I found the narrative frustrating.  It seemed like at every turn I was being asked to resolve a situation that had been made by some poor choice the girl had made off-camera before the game started.  In some cases the poor choice happened during the game narrative but in a way that I had no control over.  I get what the game was going for, she is having a difficult time of it and her choices are not always the right ones and that’s just the way life is.  But the way the game was structured I felt like I was playing the role of a friend who is always cleaning up after their friend’s poor decisions.  I think it would’ve been more effective if I could’ve been somehow drawn into the poor decisions themselves, somehow.  As it was, I felt like the character was going out of her way to mess things up and expecting me to clean it up for her, which I found frustrating more than entertaining. 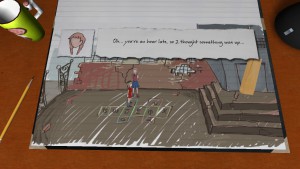 Visuals
I thought the hand-drawn visuals were nice enough, but found the “twitchy” nature of the background annoying (that is, it looks like the background was drawn several times in similar but not identical drawings and then cycles through those drawings so the outline of many objects are constantly twitching.

Challenge
Nil.  The narrative progresses no matter what you choose and there’s not specific outcomes you’re aiming for.

Story
More story than anything else.

Session Time
Can save and quit at any time, which is handy.

Playability
Easy.  The only thing I occaisonally had difficulty with is that it’s not always obvious with the way the screens are laid out  how to move from one screen to another–I felt that could’ve been arranged a little more clearly.  But other than that.

Replayability
Different dialog choices affect the outcome, so you could replay a few times trying for different outcomes to conversations.

Originality
Well, it didn’t remind me overmuch of other games I’ve played, at least.

Playtime
I think it took me about an hour to play through once in no particular rush.

Overall
Interesting idea, dialog choice based narrative game where you try to sort out your life in a difficult time, but one that I found frustrating because I always felt like I was cleaning up after someone else’s mess.  $10 on Steam.