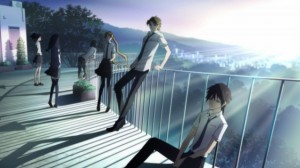 Don’t let the fact there is a mecha in the opening credits fool you. m3: the dark metal is more of a drama than an action show, and it’s one of those series where what you see in the beginning doesn’t indicate anything about where you’ll be by the end.

At first glance m3 is rather by the book. An eclectic group of high schoolers are brought together in a special class to learn how to pilot the latest technological advance, a combat vehicle called a MA-Vess that is capable of exploring the mysterious Lightless Realm that is slowly swallowing the city they live in. But the story takes a much darker turn than the norm.

The Lightless Realm first appeared ten years ago and anything in its borders slowly becomes corrupted, turning into a crystalline substance called necrometal, and haunting creatures called Admonitions roam within it.

The eight selected students have no memories of what happened to them prior to the appearance of the Lightless Realm, but it becomes apparent that all of them have met before and have a latent telepathic ability. It’s not an accident that the eight of them are in the class because it turns out their shared history and ability to Link with one another is why they, and only they, are able to explore the Lightless Realm without being driven insane as quickly as normal people.

The series is a little slow when it comes teases out the mystery of how the Lightless Realm came to be and how the main cast is connected to each other, but for those who don’t mind the leisurely pace, each revelation feels well earned.

Though there are eight students and the story initially looks like an ensemble (happily gender balanced), Akashi’s story drives the plot more than anyone else’s and he’s initially not an easy character to like. He’s cold, disaffected, and it takes a while for the show to chip away at him, but chip away it does.

m3 is really a show about understanding more than anything else.

Even when Akashi begins to recognize his own flaws and tries to be a better person, he’s constantly failing to understand. He does a lot of things that would be the heroic, the wise, the right thing to do in other shows, and it tends to get thrown back in his face when he realizes that what he thought was brave and caring is actually very selfish and inconsiderate of the other person’s desires. Is asking someone in pain to wait for you until you return an act of kindness, or a selfish request that prolongs their suffering so you can see them again?

Though I mention Akashi specifically, most of the problems in the series originate from an inability to communicate, and not for lack of trying, which is ironic in a story featuring telepaths. m3 is not a happy show (though it does have a happy ending). It’s filled with missed moments, missed understandings, and the tragedy that everything that happened in this series probably could have been avoided if one person did not have a dream to share her culture with a wider world.

The series doesn’t pull many punches either. With eight key cast members m3 isn’t afraid of picking a few off, even when it feels really early to lose someone who still appears in the opening credits. Unfortunately, given the number of them, not all of the main characters are given the same level of character development. They are all visually distinctive enough that they won’t be confused for one another, and most of them are given enough scenes to show who they are outside of critical plot events, but the audience will not get to know them on the same level as Akashi.

This is particularly egregious in Heito’s case. The show makes a pretty big deal out of his insanity early on, and then he vanishes for most of the plot with scarcely a mention that he still exists, which is a wasted opportunity considering what we get to see of his pre-insanity self in flashbacks. I was a little sad that none of the characters seem to reevaluate the difference between his past self (once they get their memories back) and his current one, because what happened to him could have happened to any of them.

Despite its flaws m3 has kept me interested week after week of its 24 episode run, making it one of the few shows I’d watch the night the simulcast went live, and I highly recommend it. There is enough material in m3 that I would like to give it a rewatch to see how everything was foreshadowed, and I think it’s a pity it hasn’t been picked up for US retail distribution as I would gladly pick it up on Blu-Ray/DVD for future viewing.

Pluses: Thoughtful story, strong element of mystery, re-examines assumptions for how people should connect with one another

Minuses: It’s not clear whether time passes differently in the Lightless Realm or it’s a narrative oversight, character development is weak for anyone who is not Akashi, some plot details drop off or get ignored entirely later on

m3: the dark metal is currently streaming at Daisuki and is available subtitled.