Yes, con season is in full swing once again.Â As usual, over Easter weekend, Minicon has come to the Twin Cities.Â Charles Stross was originally scheduled to be the writer guest of honor, but family medical emergencies caused him to bow out (good news:Â according to Stross’s blog, the prognosis is excellent.Â Hooray!).Â He called in his friend, writer John Scalzi.Â The music guest of honor was local Chas Somdahl.Â There was no artist guest of honor (I never did hear why).

So here is my con report for Minicon 46 of 2011.Â Just to warn you, this won’t be a full description of everything happening there because:
-I’m not a particularly social person.Â I do all right with people I already know, but not so much with crowds of those I don’t.Â In theory, it should be easier at a con, since I obviously have shared interests with these folks, but I still have trouble with it.Â So, most of my time was spent in the programming portions of the con.
-Also, as usual Minicon hits too near the end of the semester when everything is super busy.Â I spent the prior two weekends in my office doing schoolwork.Â I expect to spend the next two weekends in my office doing schoolwork.Â I haven’t been able to spend as much time with my family as I would’ve liked recently, so rather than spend nearly every hour at the con I tried to decide ahead of time which programming events were can’t-miss so that I could come home during other times.

Anyhoo, on with the con report.

I had to work on Friday and, well, I didn’t peruse the schedule ahead of time as closely as perhaps I should have.Â I knew the opening ceremonies were at 7, but hadn’t realized there was programming that happened after the opening ceremonies.Â On my way to the registration desk, I ran into about four people I already knew.Â This was a much better start than the previous year where every single person was a stranger.

So I went to the opening ceremony.Â Chas gave a very entertaining opening song about the life of a guitar player.Â The main art for the con was awesome, a guitar-shaped spaceship with Minneapolis perched upon it, flying to Venus.Â Neat mix of different idea.Â The OTHER art was also very entertaining, John Scalzi’s head in a water-filled jar, Futurama presidents style, to fit the theme “Not Yet Dead From the Neck Up”.

I just hit one panel on Friday, “Whose Sketch Is It Anyway?”Â Neat idea, members of the audience start a sketch and hand it off to the artist folk up front.Â Cute idea, worked well enough.Â Cute kids there to help keep stuff light too.

Music!Â Tor editors Patrick and Teresa Nielsen have a band called PNH and the Deaftones.Â Apparently the word “deaf” is actually accurate, as they said both Teresa and their other band member (whose name I didn’t catch) are deaf.Â They say well enough, with Patrick playing guitar and all three singing.Â It was a fun time, and afterward I chatted with Teresa for a while.Â She’s a very nice person with lots of fun stories; ask her about the roast of Harlon Ellison at the first Minicon she attended.

I went to the panels “Short Stories and the People Who Love Them”, “Non-Western Cultures in Fantasy”, both fine panels, no complaints.

For me the highlight of the weekend was “Live Model Drawing”.Â Awesome.Â They provided art supplies, and two volunteer models:Â con co-chair Joel Phillips in a leather kilt, and a woman who volunteered, in fantasy garb.Â It was great!Â I’ve been trying to do some sketching on the side, but usually I don’t have models posing for me.Â I’ve sketched Heather a couple times but usually she only sits still long enough if I catch her napping, and with her I worry what she’ll think of the outcome.Â “No dear, your head is not actually lopsided; that’s just my lack of skill on display.”Â So it was nice to have an hour to just sit and draw people.Â Here are pictures of how it turned out.Â Look at the bottom of this page to see the sketches I made.

And then I caught the John Scalzi Reading.Â With permission of Stross, he read the opening of Stross’s upcoming book “Rule 34”.Â It was reasonably good, I probably won’t pick it up, but it wasn’t bad.Â Then Scalzi read a chapter from a book he has slated for 2012, about…. Aw crap, Scalzi said that I can’t tell anyone or he will know about it, and send his wife to kick my ass.Â I’ve learned from experience that Scalzi hears all, and I’d rather avoid a late night pummeling from Mrs. Scalzi, so I guess I’ll keep my mouth shut.Â But when the book comes out, I’ll jump up and down and wave my arms and recommend it because it is awesome.Â After The Book Which Must Not Be Named he read from an April Fool’s novel excerpt titled “The Shadow War of the Night Dragons, Book One:Â The Dead City.”Â Hilarious!Â Even more hilarious is that many people took the announcement seriously.Â Including someone in Hollywood who called his agent expressing interest.Â Ha!

Panel:Â “Common Misconceptions About Publishing”, with Patrick and Teresa.Â Lots of good information though I’d heard most of it elsewhere before.Â Got a chance to talk to Patrick and Teresa afterward for a while longer.Â More good stories, including some real examples of what NOT to do.Â For instance, when submitting artwork, one normally sends in prints through the mail or send a website.Â Some artists insist on showing up at the office with the determined stance “My art doesn’t reproduce well.”Â Well, if that’s true, it’s a wee problem for book printing, unless you intend to hand paint every print!

And the other:Â “The Works of John Scalzi”.Â Since I’ve only read part of one short story by Scalzi I didn’t have much to contribute to the discussion.Â It was fine though, lots of audience participation.

Readings:Â And I hit three quick readings by local authors.Â Michael Merriam, Dana M. Baird, and Marissa Lingen.Â These are folks in the local writer’s group MinnSpec, which I’ve been meaning to get more involved in, so it was nice to hear some of their work.

A nice wrapup, mostly based around thanking everyone who contributed their hard work.Â At this point I realized how much cool stuff I had missed, both through my brief time there and by not exploring the con suite and other peripheral areas more thoroughly.Â Most interesting thing that I completely missed was the medallion search, a trivia-based hunt for 1973 pennies scattered about the hotel.Â Some of the clues were fairly simple but some of them were amazingly hard!Â Next year I should see if I can puzzle out one or two.

Also, the Hugo nominations were announced once they were posted online at Renovation.Â I was particularly excited about a few.Â Moshe Feder for Best Editor, Long Form–he was here for Minicon 45, and I gave my first novel pitch to him, very nice.Â Dan Dos Santos for his art–I met him at Minicon 45, a very nice guy and I bought a portrait by him of Moiraine Damodred.Â Peter Watts’ short story “The Things” in Clarkesworld, and Clarkesworld itself for semiprozine.ÂÂ Good luck everyone, but those most of all!

And with that my con weekend was over.Â Next year I won’t be in school anymore, so hopefully I’ll be able to hit Minicon 47 more thoroughly. 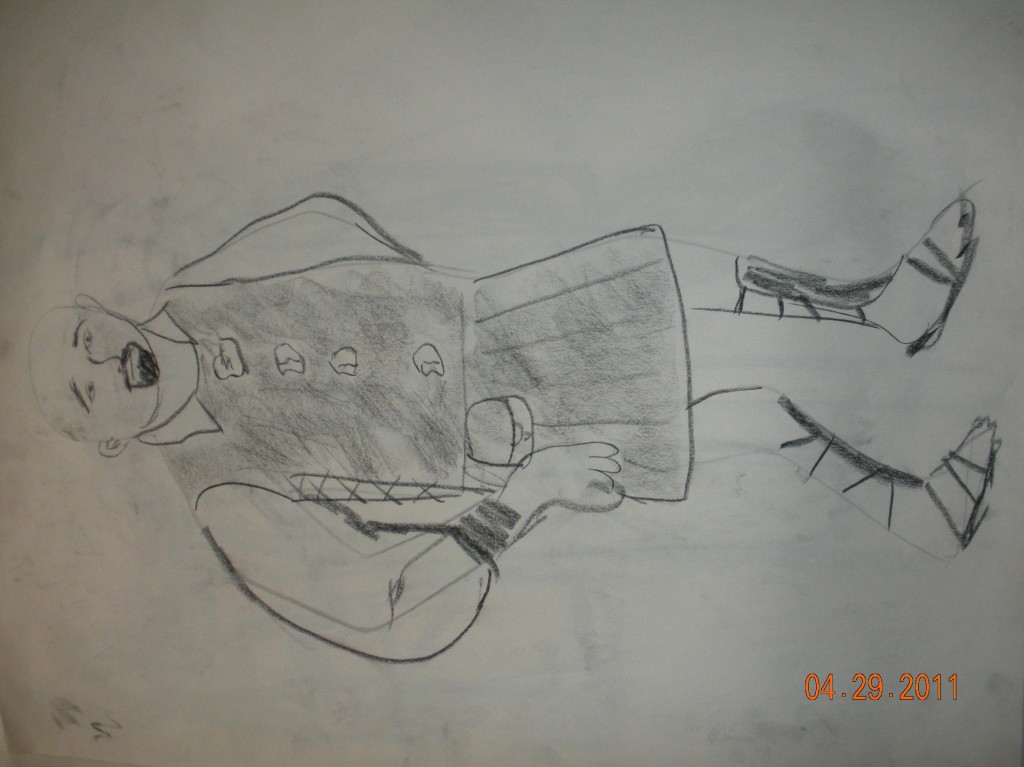 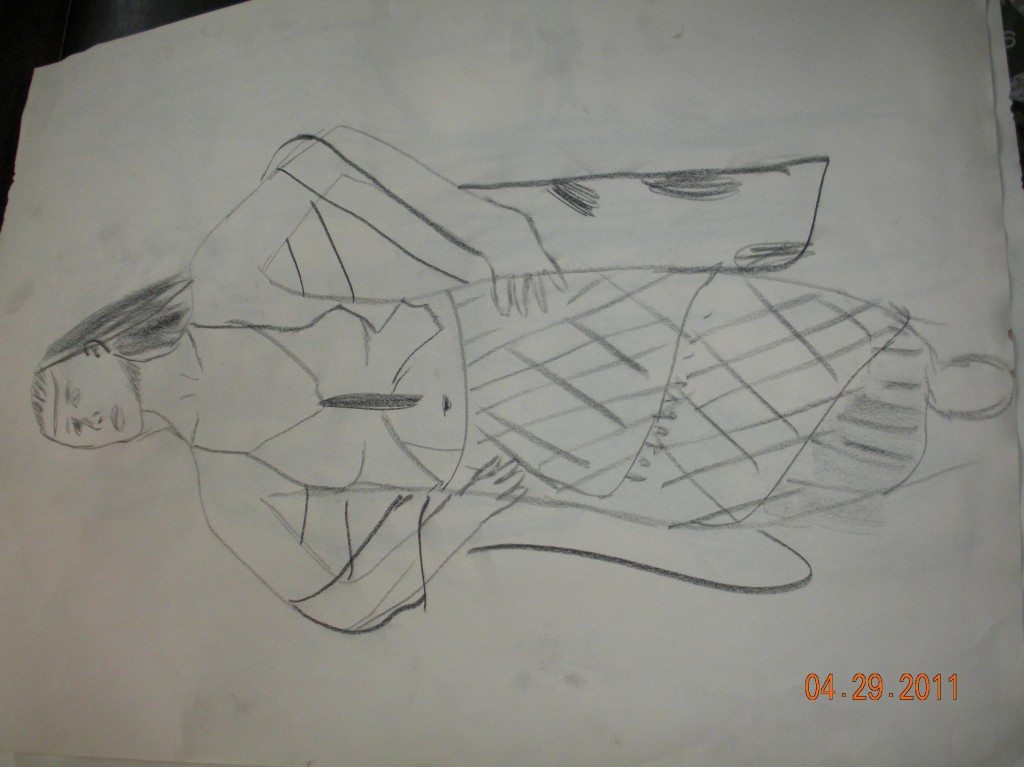 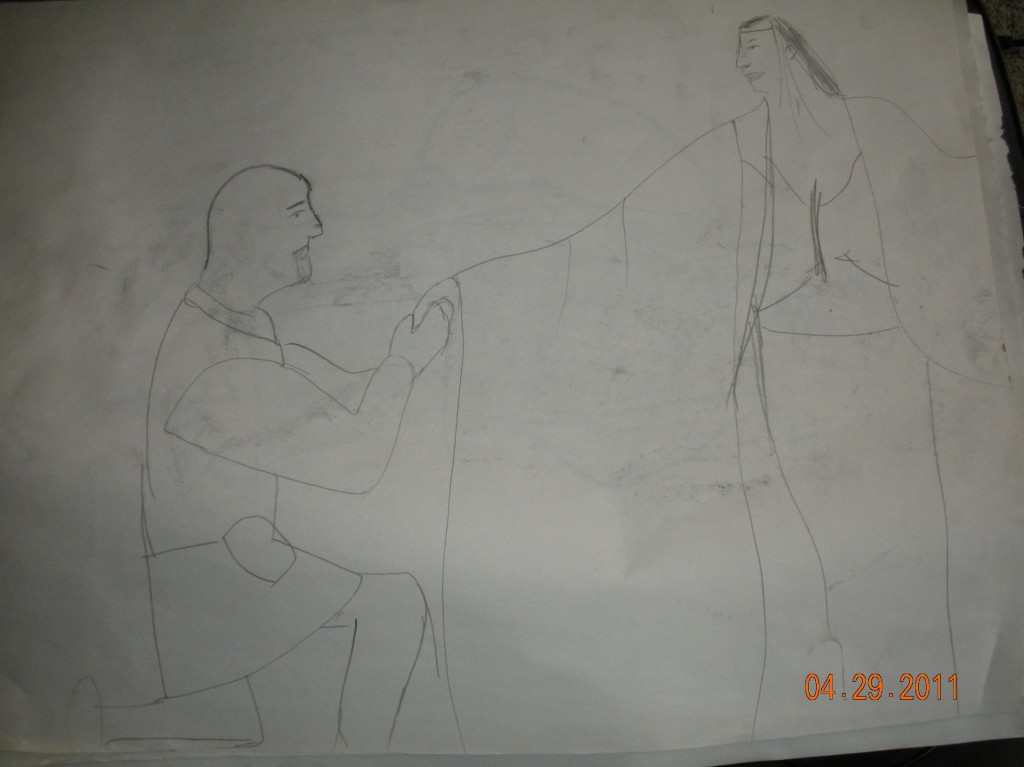 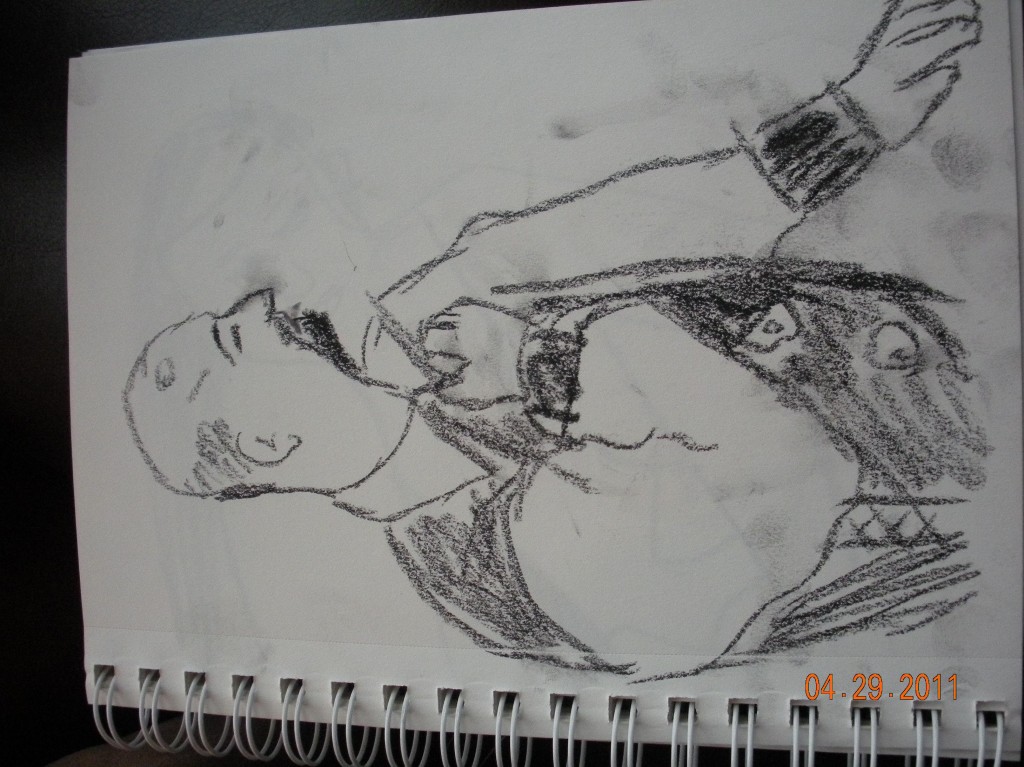 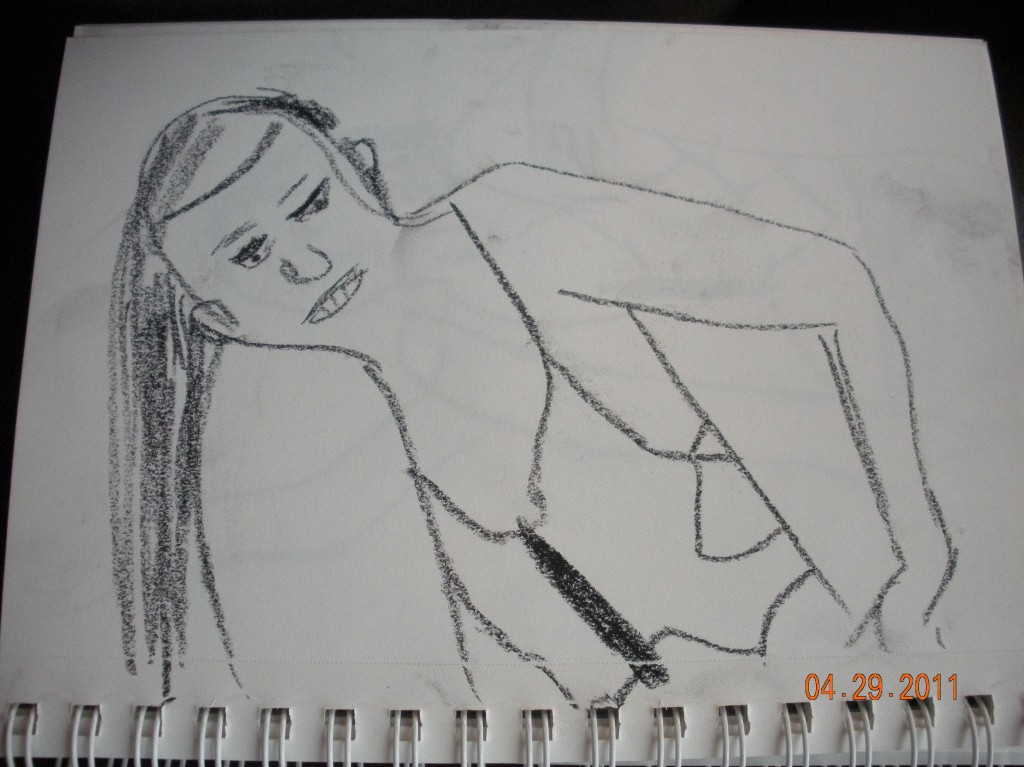 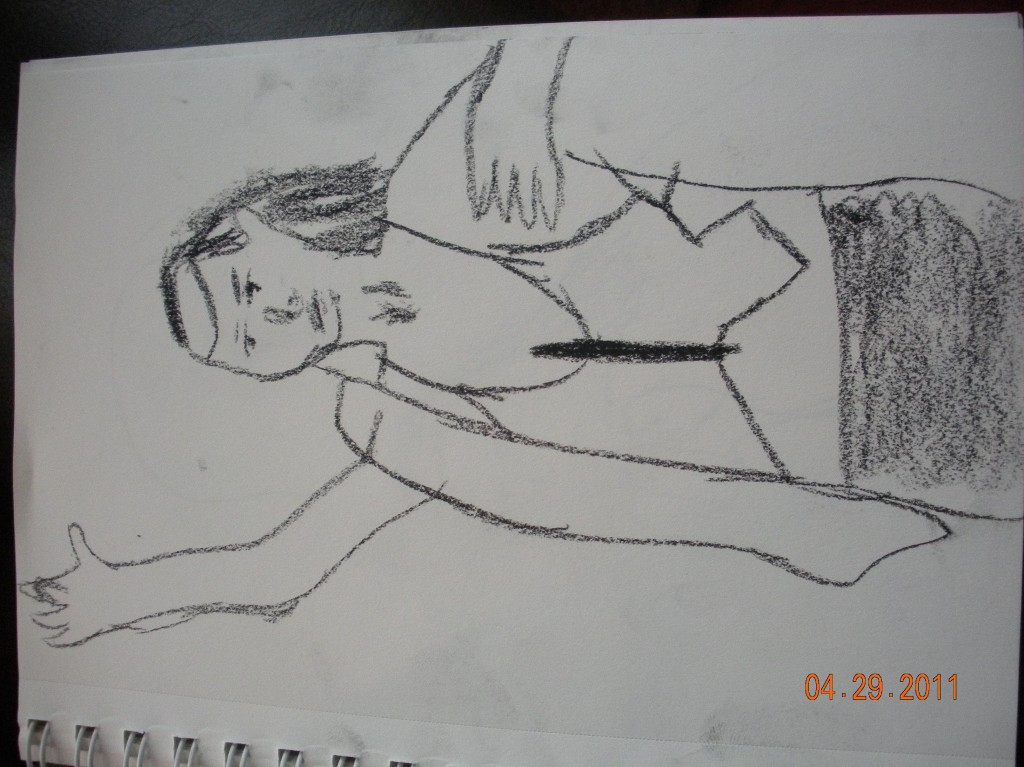 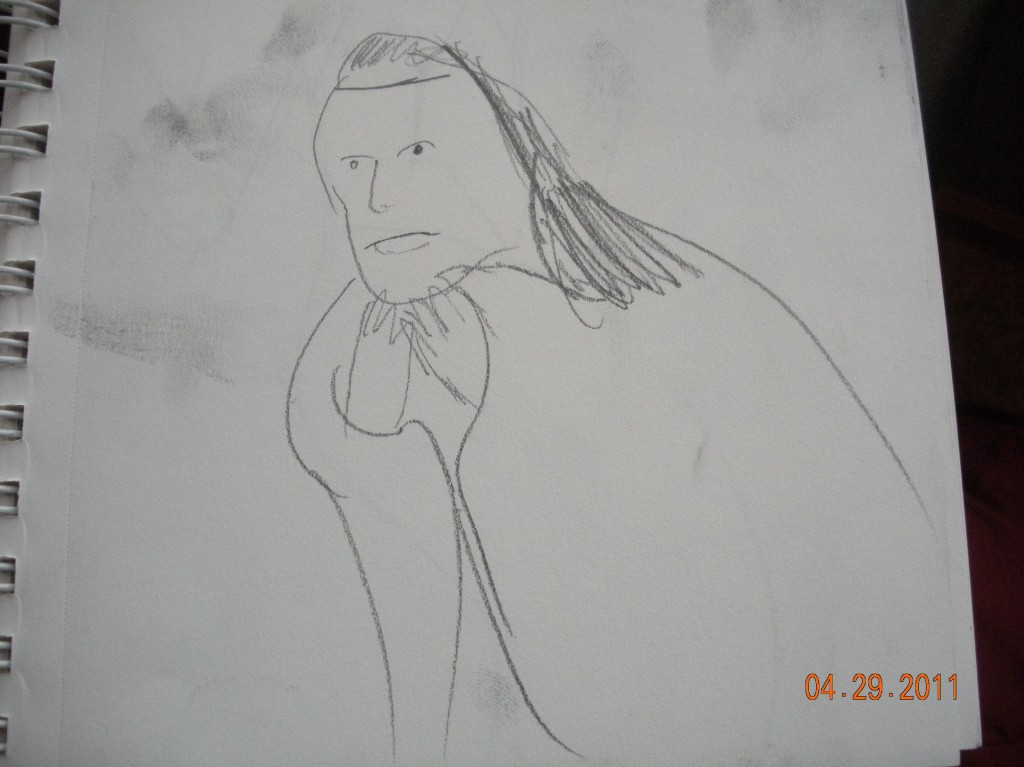 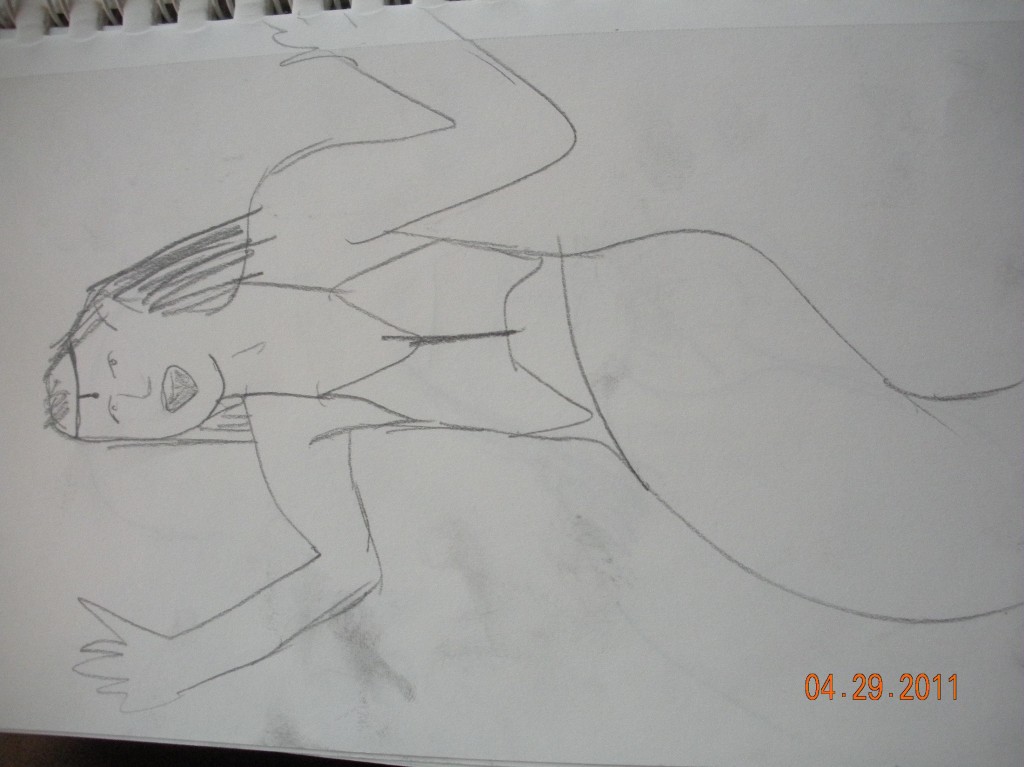