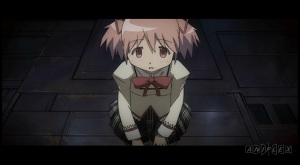 Originally airing in 2011, I didn’t watch Puella Magi Madoka Magica because I dismissed it as another magical girl show, which I’ve largely aged out of. The magical girl genre typically features elementary to middle school aged girls (more rarely high school) who get nifty transformation sequences to turn into superheroes that combat evil. Themes typically include love, friendship, and doing the right thing.

Despite the innocuous character designs showing a typical magical girl cast, Puella Magi Madoka Magica is not typical at all and what comes out of it is a hideously dark and twisted take on the genre, where doing the right thing doesn’t mean you’ll be rewarded for it in the end. Most magical girl anime is perfectly fine viewing for the pre-teen set, but I wouldn’t be comfortable showing Madoka to anyone younger than twelve.

There is blood, there is death, and the show takes everything that makes a magical girl what she is and makes it sick and sinister.

Though it takes until the end of the third episode to really ram home that this isn’t your little sister’s anime, there are enough “tells” in the first two episodes that it’s not following the usual playbook.

For one, in most magical girl series, the main character Madoka would have become a magical girl in the first episode and it would have been the start of her adventure. Instead, she is given an extraordinary amount of time to consider what she would wish for in exchange for becoming a magical girl.

For another, in the first few minutes, there is a dream sequence where Madoka sees another magical girl fighting a losing battle against a clearly superior enemy, and she’s told that the girl cannot give up or she will lose everything. While it’s true that magical girls in a typical series will fight for their friends, family, and even strangers, it’s rare that the stakes are laid out so plainly with the implication that giving up is not an option.

The result is that Madoka plays an unusual role as the heroine who actually doesn’t do much for most of the series, but suffers along with everyone else. She has the potential to be one of the most powerful magical girls ever, but she sees the toll it exacts on the other magical girls and is rightfully scared to step up to the plate, at least not without a wish that would make all her sacrifice worthwhile.

The obligatory cute sidekick character Kyubey isn’t immune to being cast in a different light, either. Like his counterparts in a typical magical girl series, he’s the one who gives the heroine her magical girl powers, but unusually, he does it in exchange for a single wish. At first it sounds like a good deal, until the show reveals what eventually happens to all magical girls. (There are two possibilities and neither of them are pleasant.)

While the take on the genre is certainly refreshing, its execution probably could be cleaner. Once it’s apparent what kind of show this is, then one of the most important twists (from the perspective of the characters) becomes obvious as early as episode 2. Puella Magi Madoka Magica still had some surprises in for me and I definitely would not have predicted the ending, but the dark point two-thirds of the way through the series had been telegraphed so far ahead of time that it felt rather weird seeing the characters experience it as a shock.

My other issue is that a lot of the problems the characters have is because no one talks to each other. If someone had asked as early as episode 1 or 2 “Where do witches come from?” the show would have gone a completely different direction.

Mysterious transfer student Homura Akemi is the prime offender because she knows almost everything and tells no one anything, especially not Madoka, who she is trying to prevent from becoming a magical girl at all costs. Homura has enough at stake that it’s arguable that she rather than Madoka, is the real protagonist of the series, but it takes so long for her story to get out there (including why she doesn’t talk about what she knows) that it’s a little frustrating.

I realize that accepting that weird enemies coming out of nowhere is a staple of magical girl shows, but if the show is going to address the emotional and physical toll of being a magical girl, it should also give its cast a bit of a brain. Just because the protagonists are in middle school doesn’t mean that they won’t have questions or suggestions on how to fight better, things they would be able to address if they knew their enemies. That said, Homura’s backstory episode is probably my favorite episode of the series.

Puella Magi Madoka Magica is very short at only 12 episodes and is completely self-contained. Though it pulls on the heartstrings (depending on the viewer, having tissues during the final episode might be a good idea), I have a little trouble recommending it because of the need for certain things to play out in a certain fashion or the story will not work. That said, it’s very short and can easily be binge watched since the entire series is only six hours long.

Pluses: Darkly unique take on the magical girl genre, haunting soundtrack captures the despair perfectly, all loose plot threads are wrapped up by the end

Minuses: Plot requires certain questions not be asked or things would not turn out the way they do, foreshadowing is a little too heavy handed sometimes

Puella Magi Madoka Magica is currently streaming at Crunchyroll and Daisuki and is available subtitled.