Many gamers (especially those from the age of 30-40) grew up with Super Mario Bros. as their big introduction to games.  The music, the visuals, the enemies, the plot are all engrained deep in your heart with a lot of loving nostalgia.

Kill the Plumber is a 2016 platformer parody of Super Mario Bros. developed by Keybol that turns the tables on the classic original.  A psychotic plumber has invaded your kingdom and he is massacring your citizens to pursue the princess who wants nothing more than to get away from her stalker.  So you mobilize your forces to fight this invader.  The plumber is fast and agile, and sometimes has extra powers like fireballs or invincibility, but you have numbers, and you can try each level as many times as you need to.

Each level is very very short, with the goal of killing the plumber.  The creatures you are control are mostly direct analogs to enemies found in the Super Mario Bros. series of games–creatures like goombas, koopas, thwomps, boos, as well as some boss characters.  The goal in each You get extra stars for completing levels faster, which you can use to unlock bonus levels. 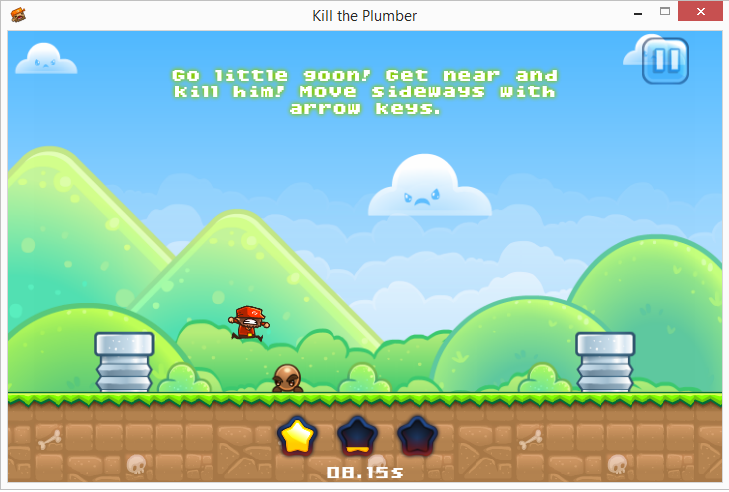 It’s fun to get to try out the other side of the gameplay, although it’s certainly not an exact reversal–though the plumber is fast and agile, he’s also very predictable–always reacting to you in exactly the same way, and so the key to most of the levels to figure out that pattern and exploit it–if he automatically jumps over you, then try to place yourself so he will jump off a cliff, and that sort of thing.

Some of the levels are fun–I particularly liked the boss battles, as well as the levels where you are a thwomp (with the enhanced ability to also move right and left).  Many of the other levels are very frustrating, especially when you are a goomba, given the extremely limited abilities, or when you’re a hammer brother (which despite how powerful they are, it’s really annoying to try to hit anything that’s running with those arcing hammers).  But mostly, the game feels like a lot of repetition–once you figure out the tricks, alot of the levels are almost identical to each other, and it started to feel rather tedious–this despite my total gameplay time to get through the whole thing only being about a half hour.  For me, at least, the game didn’t sustain my interest as long as I felt it could have.

Visuals
Simple, but appropriate, given the source material.

Challenge
There are levels of the game that took me quite a few tries to finish, and a few of the levels were what I would call genuinely challenging, but more often the levels were just based on fiddling with timing to an irritating degree that was neither particularly challenging nor fun.

Story
The story is slight, but amusing, recasting the familiar Super Mario Bros. series standard plot of “plumber going to save the princess from monsters who have kidnapped her” to “monsters defending the princess from the plumber who just won’t leave her alone”.

Session Time
One try at each level usually takes a maximum of, like, a minute.  You can retry any level as many times as you like and move on to the next level.  So it’s easy to just close the window at any time and it will save your progress.  The game shuts down lightning quick and starts up lightning quick, so it’s very easy to just play for a few minutes if that’s all you’ve got.

Playability
There aren’t a lot of controls, depending on the creature you are in control of at the moment.  Sometimes just walking, sometimes also with jumping and attack buttons.  It gets the most tricky when there are multiple creatures onscreen and every button press moves them all, but it’s still simple understand even if somewhat tricky to execute.

Replayability
There is some attempt at replayability built into the game, in terms of getting from 0-3 stars based on the time it takes to complete a level.  If you get more stars you can unlock extra levels as well.

Originality
It’s premise and many of the creatures are based on parodying a well-known game, so in that respect I guess it’s not hugely original, though the reversal of the Mario story I haven’t seen before.

Playtime
With no particular proficiency at the game, I finished the main levels in about 34 minutes.  It honestly seemed like longer because a few of the levels took a ton of tries, but when each try might only take 30 seconds I guess it didn’t build up too much.  If you wanted to get perfect scores on everything, that would certainly take longer–I have no idea how 3 stars would be possible on quite a few of those levels.

Overall
If you’re amused by the idea, you might want to give it a try for the novelty (that’s what I did), but a lot of the level designs are repetitive and some of the levels become tedious in trying to accomplish something with really unfit tools.  Probably not something I’d recommend.

Funny idea that’s a parody of a classic game that most gamers of a certain age will have played, but often becomes tedious and annoying in its challenges.  Might be worthwhile for you if you like the novelty.  $5 on Steam.