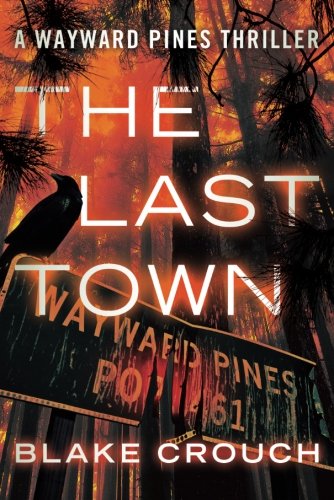 The Last Town is a… I guess I’d call it an SF/horror thriller… the final book in a trilogy written by Blake Crouch and published in 2014 by Thomas & Mercer.  There’s no way to discuss the events of this book without major spoilers for the first two books, so if you don’t want to know anything about book 1 and book 2, stop here.  I have reviewed book 1 and book 2 already.

It is nearly two thousand years in the future, and pollution of the environment has caused humanity to mutate into vicious animals with only a minor resemblance to the human species we know today.  In the late twentieth century rich the scientist David Pilcher predicted this and prepared to save as much of humanity as he could–he perfected the technology of cryogenic sleep, and took 1000 people into sleep with him.  This group of people included both a staff of volunteers who came willingly, and those who were abducted without their knowledge under the guise of car accidents and other incidents.  After waking up in almost two millennia later, Pilcher discovered that his prediction was correct, and the world was overrun with what he called aberrations or “abbies” for short, humanoid vicious predators who had replaced our species of humanity.  He rebuilt the town of Wayward Pines in the mountains of Idaho.  Those who had been abducted were woken to live in this town, the nature of the world kept a secret from them and living under the constant threat of capital punishment for breaking a long list of oppressive rules.  No one was allowed to leave, though none of the residents know that there is nowhere safe to leave to.  Pilcher’s volunteers kept surveillance over the town from a base in the mountains.

Secret Service agent Ethan Burke was one of those abducted, and he fought against the town rules until Pilcher decided to promote him to the position of sheriff to protect and oppress the people of the town.  Ethan played along for a time, knowing that there would be lethal consequences for anyone who oppossed Pilcher, but he arranged a plan to reveal the whole truth to the entire town all at once so that Pilcher couldn’t stop it, with the intention that with the whole truth in front of them the townspeople could plan a better future without the need for the oppressive rules and deadly consequences for breaking them.  He hadn’t counted on the depth of Pilcher’s mania, because in reaction to this sharing of information, Pilcher shut down the defenses that keep the abbies out of the valley and let a huge swarm of abbies loose into the town.

That’s where the book starts.  Phew, okay, all that out of the way.

This book, as the previous two, follows Ethan Burke as the main POV character.  As the book starts the stakes are already high as Ethan is just realizing the extent of the lethal problem that Pilcher has triggered.  He is a leader with military experience, and he has to do his best to organize hundreds of civilians with only limited access to weapons survive a brutal attack from the abbies.  And there’s still the question of what to do about Pilcher and Pilcher’s staff, still safe in the stronghold of the mountain.  Near the end of the last book Pilcher’s psychotic helper Pam was left outside the wall by Ethan to die at the hands of the abbies, but with the door open she can stroll right back in.  And meanwhile, Adam Hassler returns from a long trip away.  Adam Hassler is Ethan’s former boss at the Secret Service who offered up an unwilling Ethan for inclusion in Wayward Pines, and who was “married” to Ethan’s wife for a year in Wayward Pines unbeknownst to Ethan before being sent off on a long voyage to investigate abby country.

Although this one was probably the most action packed, given the premise, I found this the least enjoyable of the trilogy.  What I really enjoyed about the first book was the mystery of what the heck was going on in this town and what the point of the rules are, and all of that.  What I really enjoyed about the second book was the step up in understand that Ethan gets when he becomes sheriff, but there is still a lot of truth to uncover, and a lot of dramatic tension inherent in Ethan knowing that the townspeople are in the only area safe from the abbies and that their attempts to escape would only be suicide.  Book three wrapped up the threads from the trilogy, so it served its basic purpose.  I didn’t hate it, but I didn’t find it remarkable in the same way that I found the first two books to be remarkable because it was more of a straightforward action hero story. The townspeople all know what’s going, there’s no more attempt at the facade of a small town, the villains are very clear and obvious at every stage.

The ending of the book was, I thought, pretty weak as well. Felt like it wasn’t really planned, wasn’t really part of the story, but was just tacked onto the end because it had to do something.

The Last Town is not a bad action hero book, but it is a rather unremarkable one.  I would still recommend the series as a whole, and if you read the first two books you’ll probably want to find out what happens to the characters, but the finale is its weakest link.