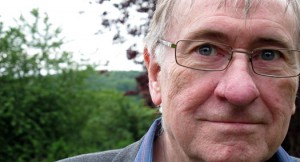 CHRISTOPHER PRIEST: Because when you know what they’re really like, they are co-o-ol.

CP: Because it’s a constant force, even if you don’t happen to witness it every day. Since 1945, more than one hundred full-scale wars have been fought, many of them still ongoing now.

CP: WW1 because of the poetry. WW2 because it isn’t over yet.

CP: I’m still struggling to come to terms with the theory of flight, which as far as I am concerned remains only a theory.

CP: Don’t you have an inner life? A shadow identity no one sees?

CS: Why the theme of what’s reality?

CP: When you discover what reality is, let me know. That search is largely what the books are about.

CS: What is the Dream Archipelago, what role does it play in your stories, and how often have you included it?

CP: The Dream Archipelago is a world with two continental masses, north and south. The north is complex, modern and industrialized, full of technologically advanced countries who have formed alliances and are at war. The south is a barren, frozen, uninhabited wilderness, where the armies of the north try to resolve their issues by violent means. Between the two continents is a vast ocean girdling the world. The ocean is crammed with uncountable islands. Culturally and racially their peoples are peacefully mixed, politically they are neutral, ideologically they are dreamers.

CS: Several reviewers have said that although they admired your stories and were impressed with your skills, they had to reread and re-reread your stories to put all the pieces together. Why not a more pedestrian approach?

CP: You want a pedestrian approach? Look elsewhere. (Plenty of it about.) I’m pleased to hear reviewers are re-reading my books. That’s music to my ears. After all, reviewers get paid to read books, which most people don’t.

CS: The characters in your books are victims or cogs. Why no heroes?

CP: How many genuine heroes have you ever met? Or even heard about? Most people do the best they can in the circumstances in which they find themselves, and some do better than others. The majority of people in the world are in one way or another victims: of financial greed, despotic governments, prejudice, cruelty, autocratic corporations, ignorance. Do you want every novel to be about Superman? I prefer to write about the world as I perceive it. 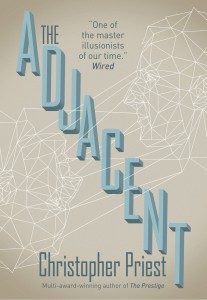 CS: The Prestige has a device that copies and transports people. Your latest novel, The Adjacent, has a device that transfers people to an alternate universe(?). You don’t delve into the science of these devices. No effort to make them seem plausible. They’re just invented and they just do what they do. Why no hard science in your stories?

CP: On the contrary, my novels always have hard science in them. What you and I call science is not the same thing. You’re thinking of the exact sciences, excluding others.

I have a broad, inclusive approach to the scientific method. There’s a science of society. A science of politics. Of demographics. Of interpersonal relationships. Of surveillance. Of criminology. A science of sex, fear, influence, people, culture, history, thinking. These are the sciences I write about, I research them thoroughly and consider that my approach to them, if not exactly hard, is certainly firm. “Science” means “Knowledge”.

As for what you call “not delving into the science” — when you use a photocopier do you tell everyone in the room how fascinating it is that inside the cabinet there is an electrostatically charged drum, which uses negatively charged paper exposed to a light source …? When you make a call on a mobile phone, do you tell the person you are talking to that all this is possible because your voice has been converted into an electrical signal which has been relayed through a series of hexagonal cells at a variety of radio frequencies …? When you drive a car …? Get the idea? That’s how my characters use matter transmitters.

CP: The only exact definition I have ever come up with is: “Books by Christopher Priest.” However, I confess that isn’t much help to someone who hasn’t read any of them.

CS: The theme of “what is reality” was also in Philip K. Dick’s books. Were you influenced by him?

CP: I read Phil Dick’s stuff when I was a teenager, and really liked it. However, at that time I was reading and liking a lot of science fiction writers, so I can’t say Phil Dick’s work was a special influence.

As for the “what is reality” riff … As I recall much of that in Dick’s books was related to chemical substances, or some kind of physical interference with the mind. My own take on inner reality is much more to do with perception, with memory, with muddle, with forgetting, with imagining, with being mistaken.

CS: How did H.G. Wells influence you?

CP: He wrote “The War of the Worlds” and “The Time Machine,” and in particular a large number of wonderful short stories. He was the first writer I came across who made me feel he was speaking directly to me, on my wavelength, away from the world of teachers and parents and critics.

CS: What’s your role in the H.G. Wells Society?

CP: My role is a more or less honorary one of Vice President. I don’t have any official duties, but I do what I can, whenever I can, to “promote a widespread interest in the life, work and thought of Herbert George Wells.” He was a great man and a great writer.

Here’s an example of something I did last year.