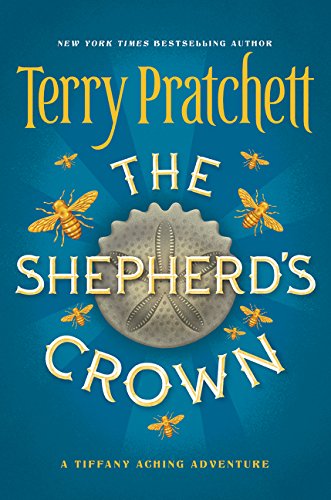 The Shepherd’s Crown is the fifth installment in the Tiffany Aching subseries set on Discworld, written by Terry Pratchett, published on September 1, 2015.  Pratchett passed away earlier this year and this is his final published work.  On a personal note, it is a somber thought to think that I have read every Discworld story there ever will be.

Tiffany Aching is a full witch these days, the only witch of her homeland known as the Chalk, a land of sheep and plains, though she has a strong bond with the witches of Lancre who trained her in witchery.  She spends her days taking care of the business of witching, which is mostly a matter of taking care of practical everyday things–bringing food to the homebound elderly, helping people with their ailments, being a sort of broom-flying country doctor.

The elves across the world boundary in Fairyland are stirring, and starting to verge into our world again.  As before they are terrific, terrible, glamorous, horrible creatures who take delight in torture and pain and who wrap themselves in beautiful glamours that make you want to love them.  They used to cross into our world frequently, but after past incursions (including the book Lords and Ladies as well as the first Tiffany Aching’s entry into Fairyland in the The Wee Free Men if you want to get a sense of the elves before reading this one) they have stayed on their own side of the boundary for quite some time.  Something has changed, and to save the world from an invasion of elves, Tiffany Aching and the other witches must find a way to fight them off and send them back to Fairyland.

The Shepherd’s Crown is the final Discworld book, the final published book written by Terry Pratchett.  This alone makes it a book that will always be memorable.  Even more so because for a good stretch of the book it feels like Pratchett is eulogizing himself–which is a plausible idea since he knew his death was coming long before it came.  This book was hard to read, knowing it would be the last new Discworld I would ever read, and even more so because of that feel that he was aware of that fact as he wrote it.  The experience was very bittersweet, because I have come to feel like I know Pratchett after reading so many of his books and came to understand some extent of his views based on the compassionate way he wrote his characters.  When Pratchett died, I cried.  I hadn’t expected to cry, but I hadn’t realized until I heard that news just how much his books had meant to me, both just as simple entertainment that any good book can provide, but also in his attitudes toward certain subjects helping to shape my worldview.  Especially on the topic of death.  Death himself, as the scythe-toting robed skeleton figure, is a recurring character in the Discworld series, even starring in a number of his own books as the protagonist.  Even in the books where he might not be said to play a major role, Death shows up when characters die, and usually has at least a small bit of dialog with the newly-departed soul before he helps it cross over to the next life.  I’ve found this concept to be incredibly comforting to imagine that when someone dies, there will be someone there who means them no malice, just a person who is doing their job in the wider scheme of things, and that the person needn’t feel lost or alone.  The act of dying can be scary, but the thought of someone being there as a guide is powerful, and I’ve grown to love Discworld’s Death as though he were a friend.

Anyway, all that to say, this book tugged at my hearstrings in a powerful way.  I imagine it will for any Discworld fans.  Big things happens, there are heroes, there are villains, and there are the terrible terrific elves.  I quite like Tiffany as a character, very relatable practical compassionate person.  Even if it weren’t Pratchett’s last book, it would still have been a very memorable one in the Discworld series.  The book felt rather unfinished, the ending felt rather rushed, but judging by the afterword, it was probably not finished to Pratchett’s satisfaction–he would write a book and then go back and adjust things several times before it had to go to the publisher, and this one hadn’t finished that full set of revisions.  It is a complete story, no doubt about it, it’s not incomplete, but the ending just felt a little off-pace with the rest of it.

In the afterword, there is also mention of the other Discworld books that Pratchett had incompletely written that we will never get to read, and it even gives one-sentence sum-ups of those stories. And that brought on the sad again.