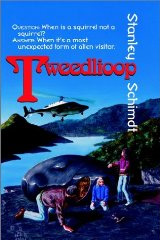 The state of our economy has forced many to make hard choices when it comes to spending money on entertainment. If you are one that likes to plow through a new book in a day or two (I generally prefer to take my time), 7.95 for a paperback novel can start to get pricey after awhile. Let me introduce you to the world of the used book.

You can find a good book if you search. Although many can be dated, you might get lucky and find a jewel within the dusty piles of worn covers. The latest, I found on rack inside a truck stop in Indiana, caught my eye because of the name of the author. If you are one that writes you should be familiar with the editor of Analog, Stanley Schmidt. While I know of him, and read plenty stories that he found worthy of the iconic magazine (none of which were mine, Dave’s, or Anthony’s, BTW), I have never had a chance to sample one of his writings. So I put down my two dollars and a bit and dove in.

Tweedlioop begins with a vacationing Bill Nordstrom, camping alone in Alaska while he is trying to get over the loss of his wife and son in a tragic house fire when he is approached by a strange looking squirrel. It refuses his offerings of nuts and chocolates and instead chooses to eat the plastic bag. The odd looking squirrel returns the next day, says the word Ã¢â‚¬ËœTweedlioop’ and prods Bill to follow him further into the forest and leads him to a crashed spaceship. Inside are three small bodies but all larger than Tweedlioop. Bill pieces together that the small critter is just a kid and is asking for his help. After thinking that would mean for him and Tweedlioop, Bill concludes the young alien would be better off left in the wild.

The next morning Bill packs his tent and finds Tweedlioop lying listlessly inside his camp. He doesn’t bat an eye as he leaves him there on the forest floor. His guilty conscience gets the best of him and he returns to see three wolves surrounding Tweedlioop. Bill manages to scoop Tweedlioop away from the indecisive wolves. The wolves follow them and finally attack Bill at a road when a tour bus stops for him.

It is the first instance in many where Bill wonders if he has made the right choice. Along the way he enlists the help of a lawyer named Danni and her nine-year old daughter Laurie. A long trip on the bus and a journey in a pet carrier aboard a plane back to Florida is rough on Tweedlioop and by the time Bill finally gets home the young alien has taken a turn for the worst, forcing Bill to take actions he hasn’t completely thought out and consequences he and Tweedlioop aren’t prepared for.

Tweedlioop is a story written in a time when the Cold War appeared to have no end and the ET craze was at its zenith. I found it curious that in that time space flight was still considered to be a top priority for our country (in reflection it could have been wishful thinking on Mr. Schmidt’s part). Reading this story set in our pasts present brought back a few nostalgic memories for me. Cell phones was a Star Trek fictional pipe dream, the personal computer was in its infancy, and playing a video game meant scooping up your quarters and hanging out at the local arcade. What I also remember was an underlying fear of the government but a bright hope in the future. Today the hope ain’t that bright and the fear of the government isn’t underlying anymore.

The storyline to Tweedlioop is pretty straight forward; lost alien wants to go home and seeks the help of an Earthling (does sound familiar now that you mention it). Despite the similarities with that Steven Spielberg project, Tweedlioop does take a more precarious path than what ET was subjected to. One glaring difference is the characters (with the exception of young Laurie) who are nothing like the ones in the early 80’s screenplay.

The story is seen through Bill Nordstrom’s eyes, an engineer working in the space industry (just a coincidence). Bill has issues with the death of his wife and daughter. Whispers (real and imagined) that he didn’t try to save them the night of the fire haunt him. When he first decides to leave the abandon alien to the hostile wilderness you cannot help but to feel disdain for him. That scene is the first in many that centers on mankind’s selfish desires and a reluctance of sticking our neck out for another. As callous as it seems to us today “not getting involved” was an accepted course of action in that period of our history.

Danni, the widowed lawyer, and her nine-year old daughter, Laurie, are the bright bulbs in this box of low-wattage characters. Danni comes off as the only competent lawyer in America. She easily spots the legal loopholes that spare Tweedlioop from the probing hands of scientists. Young Laurie develops a connection with the juvenile alien. Their friendship becomes a special bond any girl that age would dream of, a pet that can talk in a language only she can understand.

The last major character, President Wilbur Giannelli (would an Italian father really name his son Wilbur?), is a politician that was elected largely on his vision of a future in space. He sees Tweedlioop as a bargaining chip to help further America, and his political futures, best interest.

Tweedlioop, the small marooned alien, is the true draw of the novel. The squirrel like creature is a lot cuter and more convincing as a scared abandoned child on a strange world than the wrinkly, giraffe-neck ET. I never bought into the circumstances on how ET was left behind (come on, would they have really just taken off without him?), but with Tweedlioop I found the eventual revealed reason believable.

While most of the characters in this novel come off as dry, Tweedlioop (the character) is convincing as a scared child left alone on a hostile planet. The main character, Bill, however is difficult to like. He is at times selfish and wimpish. Mostly I would classify him as dense. Fortunately he had Danni’s brilliance to lean on for most of the novel. Laurie’s character is really an extension of the young alien. The two become a pair halfway in and are portrayed as inseparable chums. Giannelli comes off as a lout. He is a poor diplomat, a narrow-minded thinker, and a very bad president. I believe his character was miscast as the Commander-In-Chief. A chief aide to the Pres would have served the role just fine.

It is easy to punch holes into Tweedlioop‘s premise. I can buy that wolves would be curious about the strange smelling creature, and could see them either wanting to keep their distance or attack it out of fear but not both. How the local law enforcement went about seizing Tweedlioop is less convincing to me. It was as if all the lawyers in Naples forgot how to practice law. If a local man had a strange creature of unknown origin in his home wouldn’t an Ã¢â‚¬Ëœimportation of an exotic species’ be the proper charge?

The biggest problem I had with the novel was President Giannelli’s behavior. I would find it hard to believe that the leader of the Free World would be so demanding, unyielding, and adversarial to a people in whom he is unsure of their capabilities and clueless of the consequences in which his rash action may wrought. I would have at least if it wasn’t for the last eight years of the Bush administration. Now I would think it prudent that our government would deserve an answer from the aliens on why they were here. I could also see them asking for an exchange in technological know-how (doesn’t hurt to ask). But once those question were exhausted what’s wrong with asking for diplomatic recognition and perhaps a trade agreement (plastic industry would like that, give a whole new meaning to the snack-size baggy) between the two species? Instead of taking these logical steps, Giannelli turns all Somalian pirate, promising to back down if things get too hot. The UN diplomats act even less juvenile when they learn of events. The entire political world treats Tweedlioop as if he were a diamond ring found on the street and then discovered it belongs to the Queen of England. No ordinary reward will satisfy them at this point for his return.

Ironically, Tweedlioop is not the type of story you would find in Analog. It is hardly the Ã¢â‚¬Ëœhard sci-fi’ that I am used to reading in their pages. It was clearly written to capitalize on the ET craze (as the review byline from Publisher’s Weekly suggested on the cover). There are two questions on whether this would make a good book to find today. Does it stand up after 23 years? And, is it an enjoyable read?

To the answer the second question, it must have been for me. I plowed right through its pages. I was genuinely curious to know what was going to happen to the little squirrel. The beginning grabbed me and I read entire story in a third of the time I would usually take for a book its size. As far as if it would be relevant in today’s market? Hmmm, I would suggest a few changes if Mr. Schmidt wanted to pitch a reprint. Mostly changing Giannelli’s character as an opportunistic aide with the president’s ear. Another suggestion would be to change that disco-ball cover (yuck). I could point Mr. Schmidt to a few artists that would do something grand for it.

Tweedlioop was a Tor book publication. Its original listed price was 3.95. I paid 2.25. I found it worth the price.