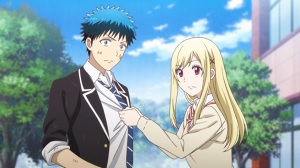 I didn’t watch Yamada-kun and the Seven Witches during its initial run in Spring 2015 because I saw the title and key art, and it looked like a harem show to me. One guy, seven witches. It’s not my personal fantasy.

But that’s not what Yamada-kun is about at all.

Ryu Yamada is a high school delinquent, known for getting into fights, coming to school late, leaving early, and failing in class. That changes one day when he literally falls onto honor student Urara Shiraishi, who holds the highest grades in their class. After waking up he discovers they’ve switched bodies, and she’s actually run off and gone back to class in his body so she doesn’t miss lecture.

Though they’re two students who otherwise wouldn’t give each other the time of day, Shiraishi and Yamada quickly figure out what happened, and that they switch bodies when they kiss. They decide to take advantage of that with Shiraishi taking tests in Yamada’s place and Yamada (as Shiraishi) getting her out of her shell so she has a social life.

The fun explodes as more people figure out their secret and tests are performed to figure out the full extent of the body swapping ability, and yes, it can be daisy-chained, with Yamada switching to whoever he kisses regardless of whose body he is currently in, and switching his new host to the body he was formerly occupying (which can be a third party entirely). The voice actors and animators have a great time with this, and it’s generally pretty easy to figure out who is currently in whose body based on their performance.

Because the kiss to body swap works on anyone, this also means that there is a lot of kissing across gender lines and crazy scenes where Yamada is demanding someone kiss him because he needs to control them for some reason. Though Yamada himself appears to be straight, he (eventually) doesn’t have an issue with kissing guys if he thinks the situation demands it.

When other witches are introduced, it becomes apparent that each of them have different powers that are activated by kissing.

The result is that Yamada-kun tends to have more kissing per episode than most anime have their entire run.

There is plot in Yamada-kun besides the wacky hijinks, but it only comes out in the second half of the show as the primary cast tries to identify all seven witches that exist at their school. There is a reason that each of the witches have the specific powers they do, and it’s tied to the various insecurities that teenagers have while in high school.

Helping the witches is ultimately what the series is about, but likely not what Yamada-kun will be remembered for.

Mostly I enjoyed it for the egregious abuse of kissing-activated magic powers in an otherwise mundane setting where getting one’s first kiss is considered a big deal. I also really like Yamada and Shiraishi as leads.

The pair of them are refreshing as love interests, because they’re pretty comfortable kissing each other right off the bat. They’ve seen each other’s junk while in each other’s bodies (the show gets that out of the way in the first episode) and after the initial reveal they don’t worry about it anymore. Shiraishi’s forwardness is also a nice change from the typical female lead in anime, as she’s the one who typically initiates the kiss.

Though the manga is still running, Yamada-kun the anime completes an entire story arc that could easily be considered the end of the series if no future episodes are ever animated. I highly recommend it for anyone who likes a little romance alongside some magical hijinks.

Pluses: entirely self-contained story arc, voice actors and animators do a fantastic job of letting the audience know who is currently in whose body, all that kissing!

Minuses: Tamaki’s introduction comes out of nowhere for a significant character, occasionally feels a little rushed to get all seven witches in, a few minor details won’t make sense if you look at them too hard

Yamada-kun and the Seven Witches is currently streaming on Crunchyroll and is available subtitled.