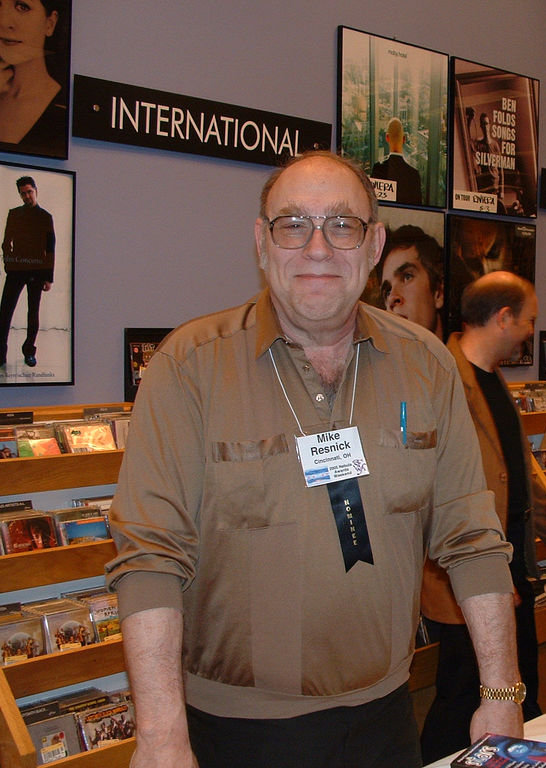 In the 1990s, Mike Resnick launched more careers with his anthologies than Asimov’s, Analog, and F&SF combined. He’s at it again with Stellar Guild. He gives Diabolical Plots the inside story on the nature and process of anthologies.

CARL SLAUGHTER: Which is a better/faster way to build a resume as a speculative fiction writer, anthologies or magazines?

MIKE RESNICK: The digest magazines. Then the print anthologies. Then the e-zines. But mass market novels are the quickest way of all.

MR: Depends on the market. Jim Baen’s Universe was paying a quarter a word when I was co-editing it with Eric Flint. Most of the print zines pay 7 to 9 cents, most of the SFWA-accepted e-zines pay 5 or 6 cents, though a few pay double that. The average anthology, at least the ones I’m acquainted with over the past half-dozen years, pay from 7 to 10 cents a word. Even when I was editing them twenty+ years ago, we never paid less than 6 cents. Which is to say, in sum, that it’s a crap shoot.

MR: Any legit magazine will buy first serial rights, and keep the option of buying it again for an anthology of stories from the magazine. Usually they want a six-month worldwide exclusive. Most anthologies will buy first serial rights, plus a worldwide non-exclusive (which means they can sell the anthology to other countries, giving you a pro rata split; but you can market the solo story anywhere you want.) That’s standard, but of course not all contracts are standard.

CS: From conception to publication, what’s the timeframe for a typical anthology?

MR: From conception, I assume you mean from the day the editor signs a contract with the publisher. If it’s an original anthology, figure twelve to sixteen months; if it’s reprint, maybe seven to twelve months.

CS: What’s the average number of stories per anthology?

MR: 5000 to 6500 usually. Which isn’t to say that flash fiction and novellas are totally absent from all anthologies.

CS: How well do anthologies sell?

MR: Not very. Most sales are made in the contracts, not the execution. And if a publisher is shelling out well under $10,000 for an anthology — and 95% of the anthologies go for four figures — then the only way he can get hurt is to spend $50,000 promoting it, or printing 300,000 copies, or hiring the equivalent of Frank Frazetta for the cover art…so he handles it like a $7,000 book…and lo and behold, it sells like a $7,000 book.

CS: Does every major speculative fiction publisher have an anthology division or are most anthology editors freelancers?

CS: Where does a freelance anthology editor get capital for their next project?

MR: You talk to “Names” that will make the book marketable, and when you get enough commitments, you take your anthology idea to the various publishing houses until someone likes it enough to sign a contract and pay you an advance. I should add that almost all advances are half on signing and half on delivery…and since you budget about 90% of the advance for stories, the editor is often a few thousand dollars out-of-pocket until he delivers. (And mass market publishing is historically a month or two late on the signature advance, and two to four months late on the delivery/acceptance payment.)

CS: Are most anthologies open to submission or by invitation only?

MR: Most are invitation only. For sound economic reasons. If I sell an anthology for $8,000, I’ll budget it at $7,000…and someone always has diarrhea of the keyboard, so it’ll cost me about $7,300…which means I’ll make about $700. Now, if I’m dealing with journeyman writers whose work I like well enough to invite them, I can usually do the editing in a few days…but if I open it to submissions, I’m going to get about 600 stories, maybe 500 all-but-unreadable, and it’ll take me a month to wade my way through them…and if I’m only earning $700 a month, I’m in the wrong business.

CS: For the ones that are invitation only, how does an aspiring writer get on the editor’s radar?

MR: He keeps his eyes and ears open, he networks, he talks to pros, to other beginners, he attends conventions. I know it seems like “invite only” means “no beginners wanted”…but I bought more first stories for my anthologies in the 1990s than Asimov’s, Analog and F&SF combined.

MR: You can whisper, very softly, that you accept submissions, and you’ll be whelmed over with hundreds of them within a couple of weeks.

CS: Novel editors put stories through extensive revision. What about anthology editors. Do they request multiple rewrites? Do they do the rewrites themselves?

MR: If it’s a theme anthology, and 90% of them are, that means it’s a story that wouldn’t have been written if I hadn’t commissioned it…and that means I have a moral obligation to the writer. I will return any story for revisions if it needs them…and on those occasions that the author simply can’t give me what I want — and it’s only happened three times in over fortyanthologies, I’ll pay him a kill fee, since as I say he’d never have taken the time to write a story on that particular theme if I hadn’t assigned it.

CS: What percentage of stories in a typical anthology are by new writers?

MR: I can’t speak for any other editors. I’d say about 20-25% in my anthologies are by new or newer writers, or to be more blunt, by names we can’t put on the cover because they have absolutely no following or value at present. This, I should add, is not a permanent condition. 10 of the writers I have bought from made the Campbell ballot after I bought their stories.

CS: How often do we see anthologies with all new writers? Is it too much of a risk for publishers? Aren’t readers keen to check out new writers?

MR: My guess is: Never. I did one for SFWA, published by DAW, called NEW VOICES IN SCIENCE FICTION, a few years back, and it contained only writers who’d broken into print in the past five years…but even so it contained some bestsellers, a bunch of Campbell winners and nominees, etc.

CS: Who are/were the heavy hitters in the anthology industry and what is their greatest contribution?

MR: Anytime between 1980 and 2005 I’d have said there was Marty Greenberg and then there was Everyone Else. With Marty gone, no one has begun to dominate the field the way he did. John Joseph Adams is putting out some nice anthologies; so is the team of George R.R. Martin and Gardner Dozois. And there’s something new afoot — the Kickstarter project. The best so far have come from Bryan Schmidt, Marty Halpern, Alex Shvartsman, and a few others…but it’s very early days in that field.

One thought on “The Inside Scoop on Anthologies with Mike Resnick”