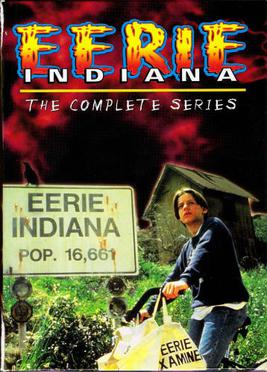 Eerie, Indiana was a 19-episode episodic young adult SF/Fantasy show that aired on NBC in the 1991-1992 television season.  It was followed in spring 1998 with a 15-episode spinoff Eerie, Indiana: The Other Dimension on Fox Kids (which I’ll touch on briefly but is not the focus of this review).  I watched it recently for free on the Roku Channel which I could access without any streaming subscriptions on my Roku streaming device.

Marshall Teller (Omri Katz) and his family recently moved from New Jersey to the odd small town of Eerie, Indiana.  Maybe because of his outsider perspective, he seems to be almost the only one to notice that Eerie has a lot of weird things happening that no one can explain and most people don’t even seem to notice, and he declares that it’s the center of weirdness for the whole universe.  Because no one believes him, he is determined to investigate and document every weird thing he finds.  He makes best friends with a younger boy named Simon (Justin Shenkarow) and in each episode they investigate some new weird thing they’ve come across.  There is some continuity that grows as the series goes on, especially in the development of secondary characters, but it is largely episodic, each episode stands relatively well on its own.

The very first episode sets the tone for the level of weirdness.  In that episode, Marshall’s mother (Mary-Margaret Humes) buys some Tupperware-like food preservation containers that can keep food fresh for an extraordinary period of time.  But as the episode goes on, Marshall and Simon learn that there are also person-sized containers that the saleswoman uses every night on her family and they haven’t aged in decades.  It’s that kind of weirdness with a fun sense of humor that made the show what it was.

I particularly like the secondary cast member, known at first as “the boy with white hair” (Jason Marsden), a troublemaking but charismatic older boy living on his own.  My greatest disappointment that the show didn’t run longer is that I was interested to see where his storyline would go, it seemed like they had some ideas in the works for him.

This family show is fun for all ages–some of the dialog and plotlines and delivery of linesare a bit simple at times, probably aimed for a younger audience in general, but the weird and novel premises like the one above make it surprising and fun for everyone.

In 1998, Fox ran a 15-episode spinoff series called Eerie, Indiana: The Other Dimension which as the title suggests is in an alternate universe from the original series.  There is a small and poorly-executed link with the original series in the form of a distorted video message from the original Marshall and Simon explaining the situation, but of course since the original actors for Marshall and Simon are too old at this point they just reused some footage from the original and distorted it enough so that they could record new voices over it.  In this other dimension, instead of Marshall Teller, the lead is Mitchell Taylor (Bill Switzer), and instead of Simon Holmes the other kid is Stanley Hope (Daniel Clark).  And Mitchell’s family and everyone is all sort of the same as Marshall’s but sort of not.  I found this made the reboot very hard to get into because I kept comparing the original to this one and finding it lacking.  I think the show would’ve had a better chance if it had either brought back the original cast and just had them older, or if they had just completely started from scratch with completely new characters, this sort of half-continuation made it hard to watch and we gave up after a couple episodes.

So, I would recommend the original 19-episode series for fans of the weird, but probably not the 15-episode reboot.