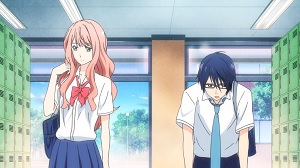 Real Girl has what is likely a cringe-inducing premise for most women. High school boy Hikari Tsutsui is a introverted anime/gaming nerd who can barely stand being around “normal” people because they make fun of him for never outgrowing his hobbies. It doesn’t help that his all time favorite series features an elementary school aged girl. Then one day he gets stuck doing pool duty with a conventionally “hot” girl who eventually becomes his girlfriend.

When I heard about the series the first thing I thought of was that it was male nerd wish fulfillment, but then I looked closer and realized it was based on a manga that ran in Japan’s Dessert magazine, which is aimed at teenage girls and young women. I decided to give it a chance.

Tsutsui (who is almost always called by his family name) is initially unlikeable. He gets stuck with pool cleaning duty because he comes late to school for the first time he can remember, which is the same for Iroha Igarashi, who is the kind of girl who looks incredibly well put-together. Her hair is styled, she’s pretty, the other girls hate her, and she has a reputation for being easy. Tsutsui immediately doesn’t like her, figuring that she’ll flake out on pool cleaning and leave it all up to him, because she sees him as beneath her just like everybody else does.

But Igarashi does show up, and they bump into each other a few more times in and out of school. He comes to realize that despite being a frequent victim of preconceptions himself, he’s also guilty of his own preconceptions about her, and once he realizes this, he tries to be a better person towards her, which results in her asking him if they’d like to date, keeping in mind that they only have six months until she has to move away.

Though Real Girl follows the story of a nerd and his non-nerdie girlfriend, it’s largely a story about communication. Tsutsui and Iragashi have a lot relationship problems. It’s never that they stop liking each other, or that they come to decide they have little in common, but there is a lot of self-sabotage, especially on Tsutsui’s part, that comes with the territory of this being the first major relationship for both of them.

Tsutsui honestly can’t believe that someone would ever be interested in him, especially someone who looks like her, so there’s an extended period where he is continually doubting that she can honestly be in a relationship with him. While he’s grateful for her, it’s possible to see how this wears on Igarashi because his repeated need to pinch himself feels like a dismissal of the fact that she does like him.

Usually this gets hammered out by the two of them eventually realizing that they have to talk, but this is high school, and nerves strike a lot.

If there’s a fault to Real Girl it’s that the human obstacles to Tsutsui and Igarashi’s relationship are largely non-threatening. When Ayado is introduced as another girl who would like a relationship with Tsutsui it’s nice to see how he reacts to the possibility that there might be one girl who will ever be interested in him, but at the same time we know she’s not a real threat. The only way her presence can sabotage anything is by Tsutsui putting his own foot in his mouth.

The same goes for the male rivals, who are similarly toothless, and Igarashi is unwavering in the fate that she likes Tsutsui despite all his hang-ups.

Probably the most dangerous character to the relationship is only introduced in the last couple of episodes, which makes for a bumpy ending to the series, as the new character and their circumstances aren’t fully fleshed out. But even so, I would still recommend this series. It’s a lot more realistic about first time relationships than most shows are, and especially for the self-doubters among us, watching Tsutsui struggle is highly relatable.

Pluses: The show is about working through a relationship rather than towards one, Tsutsui is highly relatable, depiction of relationship problems is realistic

Minuses: Rival characters aren’t much of a threat, we don’t see enough of Igarashi’s POV to understand why she likes Tsutsui so much, last minute new character not handled well

Real Girl is currently streaming at HIDIVE (subtitled, subscription required). Sentai Filmworks has licensed this for eventual retail distribution in the US.