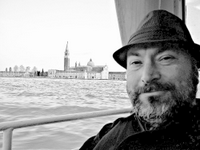 Anatoly Belilovsky is a rising star in the steampunk subgenre. He was born in a city that went through six or seven owners in the last century, all of whom used it to do a lot more than drive to church on Sundays; he is old enough to remember tanks rolling through it on their way to Czechoslovakia in 1968. After being traded to the US for a shipload of grain and a defector to be named later (see wikipedia, Jackson-Vanik amendment), he learned English from Star Trek reruns and went on to become a pediatrician in an area of New York where English is only the 4th most commonly used language. He has neither cats nor dogs, but was admitted into SFWA in spite of this deficiency, having published stories in NATURE, Ideomancer, Immersion Book of Steampunk, Daily SF, Kasma, UFO, Stupefying Stories, Cast of Wonders, and other markets.