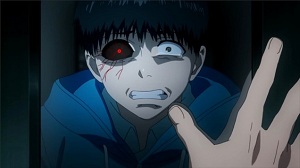 Tokyo Ghoul is a messy bag that almost made me quit watching twice, but the thing is, when it’s good, it’s powerful stuff. It’s unfortunate that the audience has to deal with so many ups and down that it gives the impression that the showrunners really had no idea what they were doing when they adapted Sui Ishida’s manga.

The premise is that there are monsters called ghouls who look like ordinary humans until they attack, during which they can project additional weaponlike appendages from their body and the whites of their eyes turn black. Their presence is known to the world and there is a government agency that monitors their behavior to keep them in check since they prey on humans for food.

College freshmen Ken Kaneki is attacked by a ghoul named Rize when an “accident” at a construction site crushes them both. Though severely wounded, Kaneki is not dead, and the surgeon at the hospital transplants Rize’s internal organs into him to keep him alive. Not long after that he discovers he can no longer eat human food without throwing up, and to his horror, the only thing that smells tasty to him is recently killed human.

Tokyo Ghoul starts dark and ends dark, but it doesn’t consistently stay that way. After his rough introduction to ghoul life, Kaneki settles into his new reality in a surprisingly comfortable fashion, considering that he’s now a human-eating monster.

Part of this is due to the fact that Kaneki is quickly adopted by Anteiku, the advisory body of ghouls that maintains harmony between their fellows in the 20th Ward of Tokyo. In addition to mediating in-fighting over hunting territory, Anteiku also provides for ghouls who are unable to hunt for themselves, generally by finding the bodies of humans who’ve committed suicide. This allows Kaneki to eat without the moral burden of having killed someone.

The other part is that ghouls are quickly portrayed as not that much different from humans. Some will only use their powers to protect their families and others will abuse them for personal gain. Ghouls marry, have children, and depending on the individual, may choose to do their best to participate in human society. What makes them different is that they must eat humans to survive.

The first half of the series focuses on the ghouls around Kaneki and what their day to day lives are like. Some of those episodes are good, like the storyline with the government investigators, when Kaneki realizes that he’s the only one who can see both ghouls and humans as people, but other episodes never rise above being a general action show, and just about any scene with Shu Tsukiyama is nauseating. That character alone almost made me stop watching. I’ll take buckets of gore over watching Tsukiyama getting off on huffing Kaneki’s blood one more time.

Kaneki starts out a timid and passive protagonist, refusing to kill and can barely be convinced to fight, but while it’s easy to see both sides of the human/ghoul conflict through him, he’s actually not that interesting because other people tend to drive the events around him, leaving him a passenger in his own life.

That is, until the mid-series finale, which is probably one of the darkest episodes of any anime that I’ve managed to stomach.

It’s not that it’s overly gory, but it’s emotionally visceral. Natsuki Hanae renders an riveting performance as Kaneki that takes the audience along with all the agony he’s experiencing, and combined with what we can hear but can’t see, the episode is intense enough that it can be uncomfortable to watch. It is probably the best episode in the series and very well done, but at the same time I don’t think I want to watch it again.

Post-trauma Kaneki is very difficult to reconnect with, which is the reason I almost dropped the show again, but after a few more episodes, I realized he was finally the protagonist that I had wanted from the beginning. It just took three quarters of the series to get there.

The second half brings the conflict between humans and ghouls to a climax, and the narrative does a good job of portraying both sides as neither good nor evil as it ramps up to the finale. A minor character might be just another enemy to the other side, but the audience goes in knowing that everyone matters to someone else.

The ending, while it doesn’t wrap up all loose ends, is thematically powerful enough that I can almost forgive everything else that slipped along the way, but there’s no getting away from the fact Tokyo Ghoul is stuffed with missed opportunities, unanswered questions, and odd pacing issues.

As far as the gore goes, Tokyo Ghoul censors all the worst bits. Partially eaten bodies are always just out of sight. There is definitely blood, sometimes buckets of it, but the worst bits of on camera violence are the ghoul against ghoul combat scenes, who due to their regenerative powers, can afford to be run through. Even the torture scenes in the mid-series finale don’t actually show what’s happening.

Because of the subject matter and the uneven presentation I find Tokyo Ghoul difficult to recommend. It’s not consistently dark, particularly in the first half, so I’m not sure horror fans would make it to the end without getting bored, and because of the very premise of the story I can’t recommend it to anyone with a sensitive stomach.

When Tokyo Ghoul is at its best it’s really good, but there’s a lot of slush in the middle and mileage may vary depending on the viewer’s acceptance of less horror-oriented fare in what is essentially an action horror series.

Pluses: Interesting take on the ghoul monster, government ghoul hunters are pretty effective antagonists despite not having special powers, neither humans nor ghouls are uniformly bad people

Minuses: Main character Kaneki feels like he’s just along for the ride for much of the show, storytelling is really uneven, fate of many characters left unresolved

Tokyo Ghoul is currently streaming at Hulu and Funimation and is available both subtitled and dubbed (dubbed at Funimation only, only partially complete at this time). Funimation has licensed this for eventual retail distribution in the US.