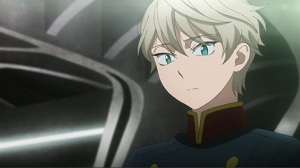 Aldnoah.Zero got off to a spectacular start, being the only show of 2014 that left me completely mindblown by the end of the first episode, and for its first half it was my favorite thing that year. But it takes an unexpected direction after the halfway point and I don’t think it was for the better.

In an alternate present day, Mars has been colonized thanks to the 1972 discovery of a warp gate on the moon by the Apollo 17 mission. But Mars was still an inhospitable world and one of its early settlers discovered the remnants of an alien technology called Aldnoah. Aldnoah bound itself to his genetic material so that no one other than him and his descendants could activate it and he declared himself emperor of the new Vers Empire on Mars. Those who served him became known as knights.

In 1999, war broke out between Earth and Mars over sharing resources which resulted in the shattering of the moon’s warp gate, much of the moon itself, and stranding large chunks of the Martian military in the resulting satellite belt. Though the war ended with the breaking of the moon, it was not a decisive win for either side. Now in 2014, the Martian princess, Asseylum, granddaughter of the man who was first bound to Aldnoah, wishes to visit Earth in an overture of peace.

The story in Aldnoah.Zero really needs to be spoken about in two halves, partially because there is a time skip at the halfway point. The first half centers around the apparent assassination of Princess Asseylum by Terran terrorists (actually Martian terrorists who want to overthrow the royals, but when Martians and Terrans are both humans it’s not easy to tell them apart). Technologically superior Mars declares war and underequipped Earth is quickly invaded.

We see the war largely through the eyes of two characters; Inaho Kaizuka and Slaine Troyard. Though both are Terrans, Inaho has always lived on Earth and Slaine crash landed on Mars as a child and grew up as a servant of the Martian royal family.

The first half of the series is stuffed with fantastic underdog battles where Inaho takes out enemy pilots in superior mecha by outthinking them. Each Martian mecha is different, with unique powers and weaknesses due to the Aldnoah technology, making their defeat a puzzle to be solved. As a result, no two battles are the same.

As Inaho is trying to protect the princess, who didn’t actually die in the terrorist attack, Slaine is trying to rescue her and foil the plans of those who would have her killed. The two teenagers repeatedly come into contact with each other on opposite sides of the battlefield. Even though both of them fear for the princess’s safety and want her returned to stop the war, Slaine is afraid the Terrans will manipulate her and Inaho fears the same about the Martians, especially knowing that it was other Martians who originally tried to kill her.

This conflict comes to a head in the mid-series finale, which was amazing… except then the time skip happened.

How well the time skip is received likely depends on which male protagonist the viewer related to the most and how much they care about Slaine, who has proven to be a divisive character.

The second half takes time to get going with some strange plot concessions that range from improbable to head-scratching that ends up undoing much of the shock that happened in the mid-series finale and the plot is clearly restructured as a fight between Inaho and Slaine and what kind of future they want to bring about. Despite the fact they both love the princess doesn’t mean that they’re on the same page about protecting her.

The puzzle battles largely disappear, replaced by political intrigue and more general skirmishes as if to remind the viewers there’s still a war going on. The rest of the cast is still here, but largely fade into the background, leaving several of their personal stories unresolved.

As for the princess herself, while she is active and trying to stop the war in the first half, she is sadly fridged for a good portion of the second (almost literally) because otherwise things wouldn’t have gotten out of hand to the degree they did. She’s not a bad character, and once she’s active again she makes it clear that she is not a prize to be won and chooses her own path, but it would have been nice if she hadn’t spent so much of the second half as a figurehead.

I have mixed feelings about the second half largely because it wasn’t what I expected after the first, and I don’t think enough was done to explain the change in Slaine over the timeskip. While he doesn’t come across as a drastically different person, it’s clear that something about him is off and doesn’t entirely jive with who he was before.

And that’s the problem. The second half rides almost entirely on Slaine, whether or not the viewer buys his actions and the motivations behind them, and it’s a bit strange considering how powerless he was in the first.

Aldnoah.Zero could easily have run into another season if a different decision in the final episode had been made, but it manages to wrap up all the major plot threads in a satisfactory manner, as well as the fates of the three main characters of Inaho, Slaine, and Asseylum.

Overall, I would still recommend Aldnoah.Zero to people who aren’t otherwise inclined to watch mecha shows, because it focuses so much on interpersonal relationships and how communication (or lack there of) drives so much of what happens between people. There may be giant robots, but they are hardly the focus. The battles are well thought out, particularly in the first half, and I never felt like someone pulled an instant-win card to get them out of a tough strait.

But if one finds that they cannot stand Slaine in the first half of the show, it’s probably not a good idea to continue as it’s unlikely any opinion on him will improve.

Though I rarely comment on music, composer Hiroyuki Sawano has done a fantastic job with Aldnoah.Zero, creating memorable tracks such as “No Differences,” an anti-war theme that only plays during combat scenes, as if Princess Asseylum herself is there to remind the soldiers of Earth and Mars of why she had come in peace in the first place.

Minuses: Slaine’s murky change in morality in the second half, second half is substantially weaker as a whole than the first, Martian side of war isn’t as fleshed out as its Terran counterpart making them harder to sympathize with

Aldnoah.Zero is currently streaming on Crunchyroll, Daisuki, and Hulu and is available subtitled.