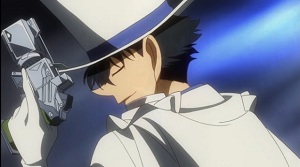 Magic Kaito 1412 is a largely episodic series centered around the adventures of Kaito Kuroba, a high school junior who moonlights as a gentleman thief to thwart the people responsible for the death of his father, the original Kid the Phantom Thief.

The source manga was started in the 1980s and only went three volumes before Gosho Aoyama launched the much more successful Detective Conan (known in the US as Case Closed), and despite efforts to modernize the setting, there are still plot sensibilities that feel much more at home in the 80s than modern day, such how easily and quickly Kaito becomes the new Kid the Phantom Thief. In a play on words, Kaito the protagonist’s name and “kaitou” the word for “phantom thief” are pronounced almost the same. It’s that kind of show.

Magic Kaito 1412 quickly runs through the origin story of the second Kid the Phantom Thief and from there mostly follows a stand-alone format, featuring a new heist or personal adventure of Kaito’s each episode (barring multi-parters). Sometimes characters are introduced and come back in a later episode. Sometimes they are never seen again. But this isn’t a particularly deep show, or a realistic one. It’s all about having a good time as Kaito tries to deal with the thefts and his double life.

As a gentleman thief, Kid always sends advance warning that he’s going to steal something, and then proceeds to do. Nothing stops him; not traps, not guards, not even a date with his not-really-girlfriend (though he does have to get creative with the last one). And because he’s the son of both a magician and a thief, many of his thefts involve a high degree of showmanship, making use of misdirects, disguises, props, and other tricks to help him set up the theft and get away.

A lot of what he does is not humanly possible, but are the kinds of things that the kid in us wishes we could do. Kaito is cocky, hyper-competent, and gets away with almost everything.

Then, because Kaito is only stealing things to stay one step ahead of the crime organization that killed his father, he returns the stolen gems afterwards when they turn out to be different from the one he and his enemies are looking for. (I guess it’s understood that if Kid gives it back, it’s obviously not the right gem, because we don’t hear about those gems being stolen again later.)

Despite the fact the premise is structured around his father’s death and thwarting a crime organization in search of immortality, Magic Kaito is generally a light-hearted show that’s eager to please. Most times, the reason why Kaito is constantly stealing things isn’t even brought up, and he doesn’t wallow in the negative emotions behind his motivation (though the two-part finale does raise the question about how he really feels about what he’s doing). And while Kaito’s double life is not a new topic in storytelling, I love that it’s more often a source of comedy than the drama it could have been.

The episodic nature of Magic Kaito also makes this series lovely when time commitment is a problem, since there’s little need to remember storylines from one episode to the next, but it does have a flaw that has nothing to do with how individual stories are presented.

Detective Conan and Magic Kaito are conveniently set in the same world, and Aoyama never forgot his earlier creation. Kaito in his Kid persona has made several appearances in Detective Conan, which is a franchise juggernaut with more TV episodes than The Simpsons. By the time this review is posted, the 19th Detective Conan movie will have released in theaters featuring a face off between Detective Conan and Kid, who takes up as much space on the movie poster as Detective Conan himself. Awareness of Kid is huge among the Japanese fanbase.

This leads to the problem where Magic Kaito 1412 just can’t cut the apron strings to its more famous brother. The first time Shinichi Kudo shows up in Magic Kaito (before his transformation into Conan) it’s a fun nod to the genius teen detective and a real pain in the butt for Kaito, when he realizes just what he’s up against. It’s definitely one of the better episodes because Kaito has to work so much harder for his win.

But someone must have decided that the show needed more Conan, so there are subsequent crossovers which directly correlate to episodes of Detective Conan that were never licensed in the US. While it’s nice seeing Kid match wits with Conan, the handling could have been a lot better, leaving me feeling like I had missed something because there was a Conan version of the story that the episode assumes I’ve already seen.

It’s particularly egregious that the episode where Kid and Conan first meet face to face is not in Magic Kaito 1412, leaving newcomers to assume they had met at some point before. Fortunately, in this case, interested Americans can watch episodes 78-79 of Case Closed streaming on Funimation to get up to speed (they fit in right after episode 6 of Magic Kaito 1412).

All said and done, I really liked Magic Kaito 1412 to the point I can safely say it’s my favorite show to have come out of 2014. It’s not perfect, but it’s the sort of thing where you know exactly what you’re going to get and it delivers. Watching Kaito steal things as Kid and parade around friends and enemies rarely fails to put a smile on my face. He really sells the show and everything that comes along with it.

I can see why Kid is a perennial favorite among Conan fans, and the show seems to have done well in the TV ratings, so I’m hoping that it will return sometime in the future, though there is very little manga material left to work with.

But if there is next time, please, more Kid and less Conan.

Pluses: doesn’t take itself too seriously without being completely preposterous, Kaito in his Kid persona is really fun to watch, almost as much focus on Kaito’s life out of costume as in it

Minuses: no definitive ending since the manga is unfinished, Kaito is so skilled a protagonist he’s rarely in substantial danger, crossover episodes with Detective Conan/Case Closed are not newcomer friendly

Magic Kaito 1412 is currently streaming at Crunchyroll and is available subtitled.