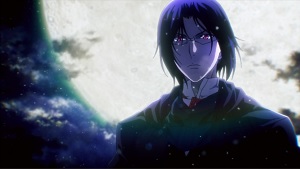 Chronos Ruler teeters on the brink of being a really good show, but doesn’t take full advantage of the best parts of its story. It’s like the writer had a lot of ideas, kept throwing them out, and chose to stick with the most cliched plot threads because the audience would be most comfortable with them. And yet, there are parts that are genuinely good that make Chronos Ruler more than yet another show about people fighting monsters.

We’re introduced to Kiri and Victor Putin as a duo hunting Horologues, time-devouring monsters that appear to people who experience a regret so deep that they wish to rewind time. Rather than granting those wishes, the Horologues feeds on a person’s time (causing them to grow younger and forget things) until nothing is left.

Initially the pair are introduced as brothers, with Kiri looking like the serious one and Victor the lazy, ladies’ man who likes to write every embarrassing moment Kiri has in his journal just so he can bother him about it later. There’s a splashy fight scene in the first episode, they save a poor girl, and all of it feels very by the book action fantasy for an urban European setting.

I might have dropped the show then, but the fight scene at the climax of the first episode forces Victor to regretfully use his Speed Up ability (as a Chronos Ruler he can command time around objects to make them freeze in mid-air or speed up their trajectories).

And that’s when we learn the truth about the pair.

Victor is actually Kiri’s father and due to a prior injury from a Horologue, every time he activates Speed Up he also de-ages. Along with losing his age, he loses his memories. The journal he keeps is how he remembers what happened between him and Kiri and he’s regressed so far at this point that if he didn’t have the journal he wouldn’t remember he had a son at all.

It’s a crazy gut punch at the end of an otherwise paint by numbers first episode.

Moments when the series is dealing with Kiri and Victor’s loss are generally the strongest of the bunch, especially once they are joined by Mina who may or may not be Victor’s wife and Kiri’s mother. I’d have to say that watching a show where a guy is traveling around with his immature parents who both look and act younger than him is not something I’ve seen before and it’s definitely part of the show’s charm.

But for every moment when the show addresses their unique family dilemma and Victor’s lost memories, there’s a lot of stuff we’ve seen before, particularly if you’ve seen D.Gray-man.

While it’s not a complete knock-off, it’s hard not to see similarities between the Chronos Rulers and the Black Order, the Horologues and the akuma, and the Oath of Time and Innocence. And Chronos Ruler is not as well crafted as D.Gray-man.

The threat of Victor losing more time, more memories in every battle is removed before it can really be an issue and we don’t get to settle into what Kiri and Victor’s lives are like before they’re scouted out by Mina and brought to the Chronos organization, which Victor has forgotten about (and apparently never told Kiri about).

Some of the battles are by the books, and others are really imaginative, taking advantage of the fact we have characters who can speed up or slow down time around objects or a particular space. The fact that the battle quality fluctuates so much, even within the same fight, is annoying for an action show because instead of elaborate set pieces we get occasional bits of brilliance surrounded by a lot of run-of-the-mill screaming and posturing that has been done before in better anime than this.

I almost quit at episode 7, which lands between story arcs, but persisted because of the familial relationships and figured I’d give the show one more episode to improve itself, which it did, just enough to keep watching.

In another season I probably would have dropped this and I can’t recommend it. Its two strongest points are how Victor’s lost memories impacts not just him but also his loved ones, and creative uses for Speed Up and Slow Down abilities in combat. Unfortunately the show fails to fully exploit either of them, in favor of being a vanilla action show.

And that’s a shame. In more capable hands this could have been a series to watch.

Minuses: series leans heavily on common action tropes without doing anything interesting with them, villains aren’t interesting or threatening

Chronos Ruler is currently streaming at Crunchyroll (subtitled) and Funimation (dubbed). Funimation has licensed this for eventual retail distribution in the US.