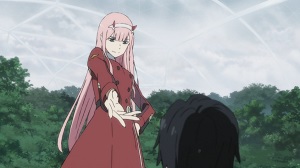 One thought on “Anime Review: Darling in the Franxx”