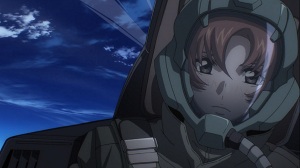 Fafner: Exodus is a series made for the hardcore fan. It’s a sequel to the 2004 Fafner: Dead Aggressor TV series and 2010 Fafner: Heaven and Earth movie, both of which have made it to the US, and also makes nods to the direct to video prequel Fafner: Right of Left, which did not make it to English language audiences. As such, this review will contain spoilers for previous entries.

Exodus makes only the barest attempt to catch up the audience on anything, and what does come out is mostly because of the three year time skip since the movie. The high schoolers of Dead Aggressor are now young adults whose time in a mecha is coming to an end due to the reduced compatibility that occurs as a pilot ages, so it’s natural to show how everyone is moving on. I think it’s telling that all but one of them has chosen a non-combat-related line of work prior to the start of the series. They’ve put in their time and none of them have been left unscarred.

The alien Festum menace still has not ended, but the Festum are no longer a united front, and there is a new hivemind (Mir, in the show’s parlance) that is heading towards Earth. If the humans of Tatsumiyajima Island can contact and befriend it before one of the other Festum, then there is a chance it can be persuaded to side with humanity.

Unfortunately, there are more than other Festum trying to stop them. The humans of the outside world (those who do not live on the island) were secondary antagonists before, but take center stage through most of Exodus, which results in a much different sort of show as the young pilots are not used to fighting people instead of aliens. Not even an alien invasion that has decimated most of the planet is able to keep humans united, but we knew that from the first series.

As in previous installments, Exodus introduces new pilots in preparation for losing the old. There is a lot of torch handing in the beginning, as a third set is drafted through a familiar sequence of Commander Makabe and Dr. Toumi visiting the parents of each pilot candidate to inform them that their teenage children are being drafted.

This once again results in a large cast of characters that needs to be juggled about, but though the new characters and the second set of pilots (who debuted in the Heaven and Earth movie) get a fair bit of screen time, they don’t feel quite as well developed as the older characters.

I think part of it is that Exodus is terrible at giving itself room to breathe, particularly in the first half of the series when it needs it the most. The original was very good at building the bonds between the pilots and their families, and then showing the cost of battle when those bonds are broken by death, which was frequent and unexpected. Pilots became casualties arbitrarily, and not because someone was clearly a less important character.

Exodus only has one casualty early on, and knowledge of it is limited to the viewing audience so there is no chance for it to affect the other characters. At times the series seems afraid to kill even tertiary cast members, which creates two problems:

Firstly, from a numbers perspective, there are just too many people to keep track of. The second set of pilots were prepared because half their predecessors were dying in the line of duty, but the third set is not replacing any casualties. Add in the assorted supporting cast, both allies and enemies (even different factions within enemy forces), and there are somewhere between 30-40 named characters. In the original series this was tolerable because of the high death count across the board, preventing too many people from sharing the stage at the same time, but with Exodus it gets out of control.

Secondly, it’s harder for the audience to get what the pilots are going through. Exodus can blow up hundreds of nameless civilians, but it’s not the same as losing a single pilot that the audience knows and cares about (either by proxy through a more established character, or for their own sake). For a show that spends so much time worrying over the human costs of war, it fails to make the audience understand what that means.

This creates a disconnect between the audience and the second and third sets of pilots who don’t feel as mature as they ought to be, given that the audience’s expectations are at the level of the original, retired pilots. When the originals are called back into service, it ends up feeling like a storytelling failure, as if the writer realized that the newer characters couldn’t stand on their own.

Not that I didn’t like seeing my favorite characters back in action, but I felt I should have enjoyed watching their successors just as much, and I didn’t. The return of the older pilots adds a layer of tension we don’t get with the newer cast. Not only is the situation desperate enough to need them despite their reduced compatibility (Sakura in particular is still physically handicapped from her trauma in the original series), but we’re aware that one way or another this is likely to be their final mission.

When the original pilots are deployed, you can see the difference in how they fight versus the newer pilots, and they’re more willing to make tough calls based on their past experiences. While it’s wonderful to have them back in action, it feels like their presence defeats the purpose of introducing a newer cast. Even with the pilots split between two locations for much of the show, they have more active mecha in each location than the first series ever did at one time.

The result is a jumbled narrative where dozens of characters are going places because that’s apparently where they need to, fighting because enemies happen to be there, and characters alternately dying or coming back from the dead depending on the needs of the story. It doesn’t always make sense and if you’re invested enough to make it to the second half the best advice is to just roll with it. With all the alien junk going on everything probably makes as much sense to the audience as it does to the pilots.

I suspect that if I had binged watched Exodus I would have been able to make more sense out of it, but as a weekly show I kept losing track of who all the people were in the Neo UN (why so much infighting?) and what everyone’s long term objectives were.

If the pilots weren’t such sympathetic characters it would have been a lot harder to watch this show.

In the end, Exodus is probably best read as a confusing love letter to the long time Fafner fan. Those who have been along for the ride since Dead Aggressor are the most rewarded as the surviving pilots from the first show have grown up for the better.

Minuses: nonsensical story, alien phenomena just happen rather than being expected based on prior experiences

Fafner: Exodus is currently streaming at Crunchyroll and is available subtitled.