The 2016 Escape Pod Flash Fiction (anonymous) writing contest had been going on for weeks, I was trapped on the wrong side of the glass, and I was convinced my critics were broken.

The length limit: 500 words maximum. If you could tell a story in less, go for it, but too much leftover room usually isn’t the problem with these. My first draft clocked in around a thousand and every single one of them was absolutely vital, but I started hacking and slashing. I’m a novice writer and it didn’t come easily, but the more I read out loud, the more I could find to get rid of. I’d re-organize things, remove others, and occasionally I’d even ADD things in a wild-eyed craze because I knew they were needed. Then, of course, the knives would have to come out again.

It hurt, but I couldn’t quit because somewhere along the way I’d decided that when I grew up, I wanted to be a writer. That I was almost forty years old didn’t help, but I knew that the only way I’d ever get any better was to actually write something where people could comment and then hopefully learn how to suck less. I had to enter the contest.

A couple decades ago, I was getting my first exposure to software usability testing. This is a thing where we would give folks off the street some cash to come in and do tasks from a list while we watched. We’d ask them to talk their way through what they were doing too so we could understand why they decided to click certain things or type others.

Basically, what we wanted to know was “Can normal people use our software?”

Stuff like this, we’d give them a basic task to complete and then we’d watch through the mirrored-glass (exactly like you’d find in any number of spy or law enforcement movies) and take notes.

I’d been working with this program for months and I knew it inside and out. I KNEW we were ready to go, anyone could use it and it was a really straight-forward interface so in my mind, this was a formality.

As people started doing the tests, things started to fall apart and I began to question the criteria used to pick them. Were these actual adults who could hold normal jobs and wash themselves? Why were they having all this trouble? I couldn’t understand how they messed up SO MANY THINGS.

“Why doesn’t he click the button RIGHT THERE?” I’d ask someone next to me after watching a tester spend a couple minutes hunting for an option.

Later, another new member to the team shook their hands over their head. “I don’t get why she doesn’t drag the icon into the folder! Has she even USED a computer before? Just drag it!”

“He’s in the wrong screen! Why does he think he can make a firewall rule HERE?! I think this is a prank. Nobody could be this thick!” I said to the other team member. They nodded. We were agreed, this was nonsense.

The seasoned developer in the room, waved at us to quiet down. “Just listen to what they’re saying”, she told us. “This is why we’re doing this.”

Finally, the person running the test asked us to quiet down because they could hear us through the glass. When we stopped talking, we were forced to listen, and when that happened we began to actually hear what this quiet developer had been talking about. No, it wasn’t obvious that they needed to drag something into a folder. Creating the firewall rule in this screen might make sense if they expect this part of the product to work like that other part they tried earlier. That button… I knew that button would take them to the option needed, but that was because I’d played with the product for months. Slowly, I grew to appreciate these tests because they showed me what we needed to do to make our products better. As I matured into my job, I started being able to see some of the problems ahead of time, early in design, and that saved us money and schedule time. I grew to be better at what I did and eventually started to look forward to these sessions.

Back in 2016, reading the responses to my story felt like I was riding an emotional time machine. I was that younger version of me again. Instead of a mirror-wall, it was the anonymity of the contest and the need to not post (because of the danger of revealing which story was mine) that separated me from the readers. “No”, I wanted to post, “that’s not what I meant at all! The character is supposed to be like XXXX, not YYYY. You’re wrong!” “That’s not it at all, that was on purpose!” I wanted to tell another poster. After reading a couple responses and yelling at my monitor, I heard that voice from my past again and this time, I paid attention more quickly.

“Just listen to what they’re saying”, that developer murmured to me from the 1990s. I hadn’t spoken with her in years, but I could still hear that advice like I was back in Pre-dotcom-era Santa Monica. I paused. If I was going to become a better writer, I couldn’t expect to hand-hold my audience. My story would need to be self-contained, if it needed explanation then I’d screwed up. “This”, I could hear her say in my mind, “is why we’re doing this”. 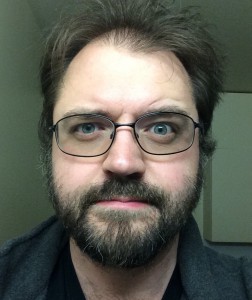 Ben Hallert is an airplane pilot with an IT habit. He’s active in the Maker community, has an extremely patient family, and like to shoot frickin’ laser beams at things for fun. His story ‘Life Sentence’ was published in Escape Pod 426 in December 2013.

One thought on “What’s Wrong With My Readers?!”