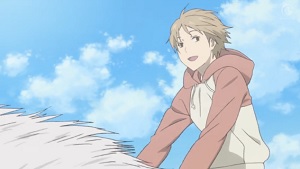 Natsume Yūjin-chō follows the ongoing misadventures of teenage Takashi Natsume, who has the ability to see youkai (spirits out of Japanese folklore) when most people cannot. Though a kind-hearted person with good intentions, being able to see youkai creates no end of headaches as they frequently want, or even demand his help, and when his small circle of friends have youkai trouble, Natsume’s the person most likely to lend a hand.

Each episode of season 5 is stand alone, and slipping into Go is like putting on a comfortable pair of familiar shoes. Due to the day-to-day nature of the series, there aren’t a lot of details to catch up on as long as one remembers the cast of characters, and even then, there’s usually some backstory help to reintroduce them.

Despite its episodic nature, if there’s anything to thematically bind Go together, it’s history. More than other seasons, we delve into the history of the characters we’ve come to know and learn a little more about the various arts used by exorcists and others who are able to see youkai.

While most series would use backstory for drama, Natsume Yūjin-chō uses it for contemplation. Youkai are a part of Natsume’s life in the same way the people in his neighborhood are and the series arguably works best when focused on the relationships between people or between people and youkai.

This best manifests itself in Takashi’s free-spirited grandmother, Reiko, whose presence continues to loom over the present day, long after her own passing. Though we now know that her creation of the Book of Friends was a forbidden practice, it’s clear that most of the youkai gave her their names willingly and cherished their brief time together with her.

The vocal cast and key production staff return from previous seasons of Natsume Yūjin-chō, but the animation this time around is handled by relatively new studio Shuka instead of the previous Brain’s Base. This is only Shuka’s third anime series and it feels like they’re still trying to get their legs under them.

It isn’t particularly noticeable from episode to episode, the character designs are spot on and background palette pure Natsume Yūjin-chō, but Go has had production issues resulting in only 11 episodes being produced, and used the forgettable “Nyanko-sensei and the First Errand” TV special as a mid-season filler.

Usually skips like this happen when the production runs too close to air date and the episode isn’t done yet, and Shuka had done the same thing with their previous outing, 91 Days (though they used a recap episode as filler instead of a pre-existing TV special).

The episodes produced are solid though and worth watching. While it’s likely easy enough to pop in the middle newcomers should start at the beginning since the entire series is streaming free at Crunchyroll.

Pluses: more Natsume and friends; more backstory on Reiko, his adoptive parents, Natori, and others; feel is spot on despite the studio switch

Minuses: run is on the short side, story doesn’t really go anywhere new