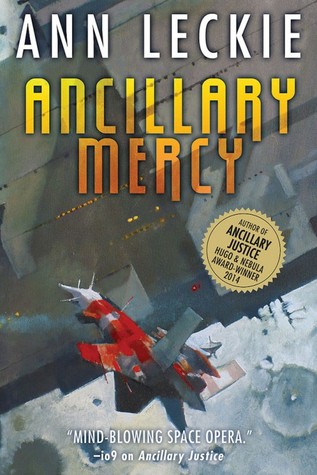 Ancillary Mercy is the third and final book in Ann Leckie’s award-winning Imperial Radch series with previous installments Ancillary Justice and Ancillary Sword.  If you are a newcomer to the series, these are books that I would recommend reading in order, otherwise there’s a lot of important events that aren’t going to make a lot of sense.  You can read my review of Ancillary Justice here, and my review of Ancillary Sword here.  There’s no way to discuss this book without spoiling major elements of the previous books, so I’m not going to try.

Breq, the one remaining ancillary (human avatar) of the starship Justice of Toren has stabilized the situation in Athoek System.  She was sent her by Anaander Miaanai, many-bodied emperor of most of the human star systems.  Well, sent here by… part of Anaander Miaanai, anyway.  The trouble with having countless bodies scattered across the galaxy is that a situation that you find truly conflicting can start a civil war within yourself.  A civil war that even Anaander Mianaai wasn’t openly admitting to until Breq confronted her at the end of Ancillary Justice.

After that initial confrontation, one faction of Anaander Mianaai shut down much of the gating system used for travel between star systems so that only military ships (which can make their own gates) can travel.  After that, Anaander Mianaai sent Breq to Athoek System with the claim that this vital station needed to be stabilized and prepared for difficult times.  Breq consented in large part because there was a person on Athoek Station that she desperately wanted to see, the sister of Lieutenant Awn who had been an officer aboard Justice of Toren.

In Ancillary Sword, Breq succeeded for the most part in stabilizing the system, although one major event that happened is that a Presger translator was killed during a violent conflict.  The Presger are an incredibly powerful alien race that has not exterminated humanity only because they have forged an uneasy treaty with them.  They themselves are nigh incomprehensible (and offscreen) and communicate through the medium of their translators–human-ish ambassadors who are decidedly strange and mostly incomprehensible themselves.

Phew, that was a rather long run-up to the actual review.  Sorry.  Even this is leaving out major important bits, but a lot of the ideas are complex enough that it’s hard to jump into book three without any context.

After this brief period of stability that bridges book two and three, events start picking up again as they find someone in the unsurveilled Undergarden area of the station, another Presger translator arrives, and one of the factions of Anaander Mianaai arrive to confront Breq and take back Athoek Station.

Ancillary Mercy is a worthy conclusion to the series.  It doesn’t tie everything off with a neat bow, far from it, but it is a satisfying conclusion to most of the major plotlines of the trilogy.  There is plenty of exciting action, political intrigue, interesting conflicts and I was never bored.  Leckie, as ever, is a master of the kind of concise writing I love best.  The pacing is perfect– the tension goes up and down with the events of the book but my interest never waned because every scene is there for a reason.

I remarked in my review of Ancillary Sword that that book felt like half a book, and I still feel that way.  To me it feels like a two book series, with Ancillary Justice as the first book, and the other two combined as the second book.  I don’t knock Orbit for publishing it in three books of approximately equal length, but it does affect how I think of them and read them.  For instance, I don’t think Ancillary Justice has to necessarily be very fresh in the mind to read Ancillary Sword, but I found it rather more difficult to read Ancillary Mercy with my only reading of Ancillary Sword 14 months in my past.  If you have a choice, now that all the books are out, I’d recommend reading 2 and 3 back to back.

One element of this book that surprised me (in a good way) was that there was a bit more comedy in this one, generally in the form of the Presger translator doing strange things, and especially in the translators conversations with other characters, especially with a particular ancillary character.  The translator, though she appears to be human, has no experience at being human and so despite being intelligent and powerful, she is also often childlike and bizarre.  If this kind of humor had been without the right finesse, the translator could’ve ended up as annoyance that didn’t fit into the series’s tone (ala Jar Jar Binks) but it was handled very well and especially contrasted well with Breq’s dry personality.  I loved it, and was surprised by it.

Out of the whole trilogy, I still think that Ancillary Justice is my favorite, for its novelty and for the extremely difficult point of view it manages to succeed with during Justice of Toren flashbacks where one POV character is existing and interacting in dozens of bodies seamlessly and simultaneously.  But to say that I like books 2 and 3 less is no insult–I like the first book so much that that’s a tough threshold to beat, and I like books 2 and 3 enough to give a hearty recommendation.