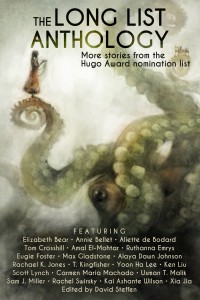 Today marks the official release ebook and audiobook versions of the Long List Anthology, a collection of stories published in 2014 from the Hugo Award nomination list.  (The print version was released not too long ago).

In case this is the first you’re hearing about this, I ran the Kickstarter to fund this anthology in October, which you can see here.

I hope you enjoy the stories in this book as much as I have.  Share links!  Leave reviews!

The Hugo Award is one of the most prestigious speculative fiction literary awards. Every year, supporting members of WorldCon nominate their favorite stories first published during the previous year to determine the top five in each category for the final Hugo Award ballot. Between the announcement of the ballot and the Hugo Award ceremony at WorldCon, these works often become the center of much attention (and contention) across fandom.

But there are more stories loved by the Hugo voters, stories on the longer nomination list that WSFS publishes after the Hugo Award ceremony at WorldCon. The Long List Anthology collects 21 tales from that nomination list, totaling almost 500 pages of fiction by writers from all corners of the world.

Within these pages you will find a mix of science fiction and fantasy, the dramatic and the lighthearted, from near future android stories to steampunk heists, too-plausible dystopias to contemporary vampire stories.

There is something here for everyone.

The cover art is by the Hugo-Award winning artist Galen Dara, the cover layout by Pat R. Steiner, and the interior layout by Polgarus Studios.  Audiobook production by Skyboat Media.