Lightning Dance sat next to Willa Bernardi on the side of the road. Rain splattered down around them, damp and uncomfortable, and the heavy smell from the gutter wrapped the air. Dance balanced a cigarette between her gloved fingers; its red tip glowed in the dark street. Somewhere in the distance sirens blared through the city. The police, ambulance, fire brigade: everyone came, and also probably the media.

Dance had pushed her mask up off her face, and without it she looked almost too human. She was beautiful, but faint lines of cynicism marked her mouth and eyes.

Willa huddled further into herself. She tried not to shiver in the chilly air. The rain had plastered her hair to her face. She’d lost her shoes somewhere, and her frozen feet were scratched and muddy. Her blue satin dress, which she’d thought so beautiful — which she’d thought made her beautiful —was ruined, the material stained and torn. Willa stared at her toes and wriggled them.

Dance wore elegant white boots that enabled her to leap from building to building, from wall to ground, as she fought the villains of the city. She didn’t have regenerative powers, but she was never hurt; she moved too quickly. Not many knew that, but Willa did. Willa knew everything about Dance — or so she thought, once upon a time.

Willa darted a quick look at Dance as the hero took a long drag from her cigarette. The street was empty of anyone but them. The sirens grew closer, but no one had passed the abandoned district and stopped to gawk; they’d follow the sirens. The constant sound of water mingled with the slow crumble of the half-demolished building behind them. One functioning street light reflected off the river of water gurgling through the gutters; the rest of the metal poles had been torn up and used as weapons in the fight between Lightning Dance and Unbender. He had used the poles; Dance fought with speed and lightning and pure grace.

The remaining light lit up the street all too clearly. A clump of something unidentifiable swirled by in the gutter, and Willa prodded it with her toe. She almost wished she shivered in the safe, obscuring dark.

“Your boyfriend?” Dance asked unexpectedly between drags; her voice was husky.

Garret had been charming and witty, and raised so many red flags, but she’d ignored them because she could never say exactly why he made her uneasy. Men like him never paid attention to women like her, and she’d alternated between amazement and terror that she’d do something wrong. She didn’t know if Garret had been real — if he was the person behind Unbender’s mask or if he was the mask.

“Babe, you have shit taste.”

“Yes.” Willa remembered the posters on her wall, at first of all the heroes, but then only of Lightning Dance. She remembered the scrapbook of newspaper clippings, then internet articles, the montage of computer backgrounds, and the embarrassing fantasies through high school she wouldn’t even share with her best friend. She still had everything stashed in a box in the back of her cupboard.

Dance muttered something under her breath, cursing, and Willa hugged her knees tightly to her chest. Her wrist hurt. Dance had dropped her down the stairs to get her out of the way, and she’d landed badly. Tears pricked her eyes, and she was glad then for the rain that spat around them.

“Not even going to say thank you?”

Dance snorted. She stretched out her lithe body clad in white Lycra that somehow remained clean despite the fight and the mud and the dirty gutter. She didn’t look uncomfortable in the rain, only indifferent. “Not very grateful, are you?” She snuffed her cigarette on the wet sidewalk, then tossed it out onto the road.

“You shouldn’t do that,” Willa said.

The hero, one hand on her mask to slap it down and the other poised to push her to her feet, paused.

Willa flushed. “It can cause fires,” she whispered.

“Huh.” Dance half-smirked. “Not in this weather. Pretty sure I just caused a hell of lot more fires anyway.” Dance jerked her thumb back over her shoulder at the demolished building.

A piece of crumbling wall crashed down and drowned out the sirens. The explosion of dust momentarily overwhelmed the stench of the gutter. Any fires within probably sizzled before the growing onslaught of the rain. It had been an empty warehouse. Garret had said it was an exclusive nightclub. Willa hated nightclubs. It hadn’t seemed odd when they entered the abandoned district; exclusive often seemed to mean luxury in squalid surroundings.

Dance leant back again and pulled another cigarette from her belt but didn’t light it. “Do I know you?”

The hero’s lips twisted. “Fair enough. Half expected a ‘you saved me once before’ there. It’s normally what I get.”

“You did once.” Willa rested her chin on her knees and stared fixedly at the road. “I was five.”

“I don’t expect you to.” And she didn’t. She’d walked on air for days. She’d fallen in love with Lightning Dance then and there, and she’d thought she’d never fall out. “You rescue people all the time.”

“Way too many sometimes,” Dance muttered.

Willa twisted a fold of her soaked dress into her clenched fists. The sirens grew louder, and the rain heavier.

“You know…” Dance said slowly. “I do remember you. I think.” She twirled her cigarette in her hand and touched a fingertip to its end. With a slight sizzle of lightning, the cigarette glowed.

“Yeah, I do. You told some dude off for littering then, too.”

Willa had. She’d stood up, a tiny child scratched and bleeding, and berated the bemused mayor. Dance had laughed, looked right at Willa, and told her not to change.

“The mayor.” Dance took a long drag on her glowing cigarette.

She’d almost rather Dance didn’t remember her. Her eyes ached through the rain. Her arm, still locked around her legs, throbbed from elbow to fingers, and she didn’t dare move it.

She wondered if Garret was dead or if he’d escaped. Nothing had been clear in the fight.

“Well.” Dance breathed a smoke ring that lasted only a second before the rain ripped it apart. “You were a lot more grateful then.”

Willa tilted her head back to the sky. Despite the rain, she could see a sprinkle of stars. A quick burst of light that sped across the clouds was probably Sprint. The city had a league of heroes; some places could only handle one.

“Babe?” Dance looked at Willa as if she was actually interested, and the cynicism in her face faded a little.

The hero laughed and flicked her barely touched cigarette away. “I always thought that was a good thing.”

Willa thought she could hear the engines of the emergency response vehicles now as well as the sirens. They had to be near. “Not always,” she said before she realised she was talking – before she remembered she was sitting and waiting and hoping Dance left to save someone else. “When you’re little, you believe in everything.”

“Reckon if you’d closed your eyes and said this ain’t real, Unbender would have disappeared?”

Willa hugged her legs tightly to her. “No. You believe in heroes and good people and bad people and everything makes sense. When you’re older you realise…”

“Ah.” Dance tapped her fingers against the pavement. Lightning twitched across the concrete, and the rain evaporated with a hiss. As soon as the lightning disappeared, the dry patches disappeared too. “Sorry, babe. There are good people out there. I’m probably not one of them.”

Willa ducked her head. Lightning Dance was one of the good people. And Dance had to be good – she’d saved Willa when Garret would have killed her. She saved people. She protected the city. She just…

“That’s the problem with being a hero.” Dance’s lips twitched, a bitter movement. “People expect you to be perfect.”

Dance rose and wandered down the road; she flipped her mask down, preparing to leave, and suddenly looked much less human and much more the hero on the pedestal where Willa had put her. Willa dunked her feet into the freezing water in the gutter. Her cuts stung, but some of the mud washed away.

Looking back, Dance paused. “Hey, babe, don’t do that. The water’s probably contaminated.” Lightning flared around her and lit the street.

Willa blinked stupidly; then she looked down at her feet. A strangled laugh caught in her throat. It seemed Dance couldn’t help herself: she had to stop and say something because she saved people despite themselves, even when it irked her.

She drew her feet from the gutter, and Dance nodded in satisfaction.

“Two minutes, and the ambos will be here. You’ll be fine. I’ll see you around, babe.” Her teeth flashed in a grin beneath her perfect white mask. “If I’ve rescued you twice, I’ll rescue you again.”

She darted away, up the wall of the nearest building as if it was flat ground, and Willa sat alone in the street. 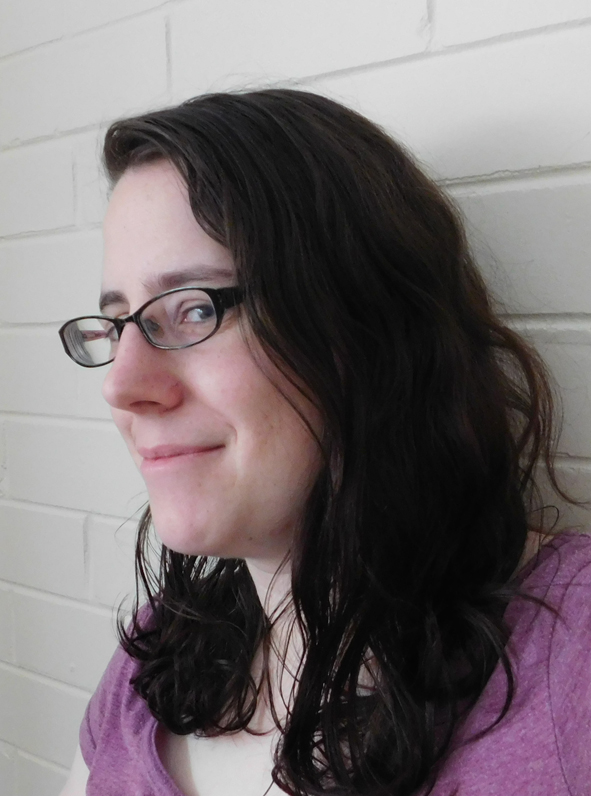 Tamlyn Dreaver grew up in rural Western Australia and now lives in Melbourne. She’s never had a secret basement or a dragon nesting in the backyard or anything nearly as interesting so she makes up stories about them instead. She can be found on the web at www.tamlyndreaver.com and tweeting at @tamlyn_dreaver.

One thought on “DP FICTION #32A: “Lightning Dance” by Tamlyn Dreaver”