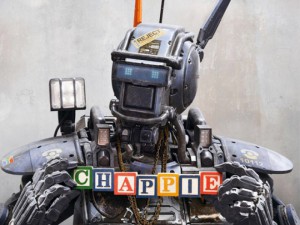 Chappie, for instance, will tell the story of a future dystopian society that has come to rely upon a robotic police force. “Chappie” is a police robot that is stolen and reprogrammed so that “he” is sensitive to external stimuli in much that way that human children are. In other words, he is capable of learning and feeling, and his experiences and observations inform his behavior. On the one hand, you might think of it as some bizarre synthesis of Robocop and Kindergarten Cop. You might also see it as a modern day nod to classic sci-fi films like The Day the Earth Stood Still, wherein the robot is merely a foil to expose how cruel and irrational people can be, and the notion that people are not born to be hateful or violent — societal conditioning plays its part.

Ultron takes a slightly different approach. The film will feature the Avengers crew squaring off against Ultron, a robot that is hell bent on destroying the human race. This narrative treatment is perhaps a little closer in substance to the tech paranoia present in something like 2001: A Space Odyssey, where the robot itself is a danger because it has been given the agency to make decisions even though it lacks the capacity for empathy, even though “he” is a somewhat sympathetic character “himself” — disturbed even, to borrow a phrase from director Joss Whedon. Ultron is a not a cutesy foil — no part of him is Kindergarten Cop derivative.

Ex Machina is notable for its thematic integration of gender politics. The film revolves around a young computer coder named Caleb who gets the unique opportunity to spend a week in the sprawling estate of Nathan, the head of the tech company that Caleb works for. Within the home, we meet “Ava,” a feminized cyborg who is endowed with remarkable wit and an uncanny facility for verbal communication. Caleb, we learn, has been brought to the sprawling estate on false pretenses: the real reason he has been recruited is so he can perform a Turing test on the robot. Nathan, we learn, has a whole ward of female robot servants that he routinely mistreats. Of the three films discussed in this article, Ex Machina promises to be the most somber and thought provoking.

For everything that’s advantageous about modern technology, there are many risks. And while other people ultimately pose a much greater threat against people than robots pose against people, it’s difficult to completely suppress one’s occasional discomfort with the thought that, in a few decades time, the machines could rise from the kitchen to enslave us all.

These are all tropes well-rooted in Cold War era science-fiction. In the aftermath of nuclear weapons dropped in Japan, the entire planet was left to ponder about what could happen to the world if scientists were allowed to run mad like those kids in that one sequence from Kindergarten Cop. This doesn’t negate all of the wonderful things that contemporary technology has brought us. Automated home security systems are obviously pretty useful (more info here) and so are robotic surgeries (details here). But when you read about technological devices that are used for the sole purpose of harming people…it’s hard to think of that as progress.

One thought on “Robot Movies You Should Watch in 2015”