Chuck was an action spy action/drama/comedy show, starring Chuck Bartowski (Zachary Levi), who started as a down-on-his-luck geek working at the BuyMore fixing computers, when he ended up with a supercomputer with government secrets downloaded into his brain, as he has been used as an intelligence asset. And later in the series he got an upgrade to the software that also gave him various physical skills like martial arts. Season 5 was only 13 episodes and aired from October 2011 through January 2012.

The end of Season 4 and the beginning of Season 5 return to the shows roots, but with a twist, as Chuck, Sarah (Yvonne Strahovski), and Casey (Adam Baldwin) use money they’ve earned to buy the Buy More and continue to use it as a base for their freelance spy organization Carmichael Industries. But, at the end of the last season, a set of programmable sunglasses that was meant to upload a new copy of the Interact computer into Chuck’s brain was instead worn by Morgan (Joshua Gomez), so Morgan now has the knowledge of a government supercomputer and extra physical capabilities of the Intersect, so he is the new focal point of their organization and Chuck is now acting as his handler (like Sarah used to do for him in the early seasons).

This final season of the show was a roller-coaster ride, where they tried new things that they hadn’t done in any of the previous seasons (Morgan as the Intersect being just the first!) and I got the impression while watching that the writers were told to build in multiple big finales throughout these episodes in case they got cancelled earlier than that (and maybe there were more finales written for later that never aired). As a result, on top of the individual episode arcs, and the overall season arc, there were also couple-of-episodes arcs throughout the season, and things that seemed like they had the shape of an overall season arc would very suddenly end.

I was sad to see the show end, and there are things about the final season that I wish had been done differently, but it was good to finally see how they wrapped up the show’s portrayal of the Chuck and Sarah story.

If you’ve watched previous stories, you really should watch it, to see how it all turns out.

Chuck was an action spy action/drama/comedy show, starring Chuck Bartowski (Zachary Levi), who started as a down-on-his-luck geek working at the BuyMore fixing computers, when he ended up with a supercomputer with government secrets downloaded into his brain, as he has been used as an intelligence asset. And later in the series he got an upgrade to the software that also gave him various physical skills like martial arts. Season 4 aired from September 2010 to May 2011.

In this season, Chuck and his partners Sarah (Yvonne Strahovski) and Casey (Adam Baldwin) face a new adversary in Alexei Volkoff (Timothy Dalton), a criminal mastermind who is still working with Chuck’s mother who he hasn’t seen since he was a child. Everything changes while remaining the same as the CIA takes over the Buy More and converts it into an official base, and builds out new areas that even Chuck and his partners don’t have access to.

While Season Three had started out shaky but got stronger, Season Four is reasonably solid throughout, new situations, expanding on Chuck’s physical abilities, and taking new steps in the relationship between Chuck and Sarah. The Buy More continues to offer the comic relief while also tying into the CIA plots, while also changing as the managerial structure changes and now Morgan (Joshua Gomez) is in on Chuck’s secret so manages to involve himself more and more. At the same, it’s hard not to miss the early seasons of the show where Chuck was clever but flighty and not physically adept. But the show has changed into something different, even if the first couple of season were special in their own way. 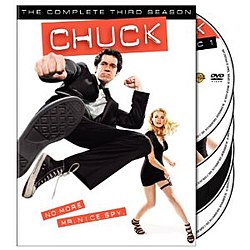