My roots felt only earth. Thin, and good for nothing but wild grass. As I stretched under the ground, I caught the tang of metal, something sharp and not yet rusted. Clean metal, likely dropped when this patch of land was well behind the battle line. Still, the promise it made helped me exert all my energy into those roots, willing them deeper and farther out.

Sunlight glistened off my barbed leaves, feeding its pale energy to my efforts.

I was not the only blood tree growing on the battlefield, and my concentration broke when my sister began chanting. She was double my height already, as if she’d focused her efforts on leaves and branches instead of roots, but her chanting told me she hadn’t needed to work hard below ground. By instinct I recognized the nature of her words, the cadence of syllables sighing from the pores in her leaves. She chanted the lives of those whose blood she drank.

I sent a root toward her, running just beneath the surface. There was blood, battle-spilled blood. My purpose, my need, a far greater energy than the sun’s.

Her roots fought back. They sliced the tip off my root, so I branched out to either side, but they bludgeoned those runners into a pulp. Already, the blood had made her strong.

Over the silent warfare of our roots, my sister’s voice kept chanting the lives of the fallen.

She grew taller, and her leaves turned a green so dark it was nearly black.

I needed a different approach. For several days I tried focusing nearby, redoubling my efforts to dig deep, to widen my circumference. I found one patch of blood, but it was old, no part of the recent battle. It fed me, but its energy was gone too soon, and my voice had no life to chant. The nutrient-poor soil kept me small. Too long of this, and my sister would be able to block the sun from my leaves, as well as the blood from my roots.

My first break came when I discovered I could send a root over the ground. I sent a dozen one night, sipping at the earth as they went deep into her territory. Ah, the blood. She had no defense, since she wasn’t even aware of my presence. I kept them moving, never letting them sink too deeply into the patches of blood, so I might keep their presence a secret.

But my voice I could not keep silent. When the sun rose, I had no choice but to chant. Harsh lives and brief, I sent their deeds into the air. A child who’d lied about his age. A peasant unsure what to do with the weapon in his hands. A woman in disguise who brought down a dozen enemies before she finally fell. One of her victims a veteran of earlier wars who should have been allowed to rest at home.

The words tumbled out into the dawn, and my sister broke off her chanting to counterattack. By noon my runners were dead, spilling no blood by which they might be remembered. My sister’s chants went on.

As the last of the stolen blood passed up to the buds on my twigs, I discovered that even when it was gone I didn’t have to be silent. I had no more lives to chant, but I could sing a strange cry. The blood-fed buds rang out my voice. I imitated my sister’s chants, made up lives to speak. She wasted energy pursuing my roots, trying to find the blood she thought I drank.

She would discover the truth soon. My words wouldn’t fool her forever.

I played with the sounds of my voice, trying other noises that didn’t resemble our usual chants, and a bird came near to investigate. Birds avoid our kind, but my song overcame its instinct. I strangled the bird with a vine and added its blood to my song.

What else might I attempt? I changed the patterns, and squirrels came to see. Their blood tasted of hard nuts and high leaps, and their fur made my leaves droop in distaste. They made my song wilder and louder.

My sister’s trunk twisted in her desperation to find the source of my song. Her own chants continued, of warriors and the many lives lost to blade and spear, but less sure as the days went on. Doubt bled her, even though the blood of birds and rodents couldn’t give me the strength of her soldiers.

Larger animals came to my call, in the days and months that followed. An elk’s blood is strong, but the animals are wary. Wolf blood is rarer still, but when I managed to catch one, it gave me a fierce strength to rival my sister at her greatest. Deer and feral pigs and jittery pronghorns made me grow, made my bark thick.

My sister grew taller than me, though. She tended the battlefield’s blood with care so it aged beneath her without its strength leaching away. We were no longer saplings when she gave up trying to find my secret source of blood and took to attacking me directly. We know the many ways animals hunt, we trees–slow or fast, in darkness or from hiding–and we’ve chanted enough human lives to know the ways of war. When trees hunt, it is like and unlike those. Slower, no doubt. A gradual advance where each of us aims for a sense of the inevitable. But just as bloodthirsty and mindless, a single focus of angry contempt. I wondered if her sap would taste of blood when I defeated her, wondered if I would someday chant her life as I drank all that remained of her. I imagined ruling the entire plain of the battlefield on my own. But most of the time I knew well that I wouldn’t win. Eventually she would drink my sap-blood, would chant my sorry life, would rule alone.

If it was to be a battle, I would need more blood.

I wasted no energy on defense. Nor on attacking. Instead I crafted a new song, put every dram of blood into a summoning.

Humans. They are always ready for war. A simple push, a siren’s call, and they will march. Two armies drew toward me.

As my sister’s branches reached toward me to block the sun, the armies closed in. With my roots I pulled at the ground, channeling their charges toward my meager shade, where I waited to drink. Their clamor tasted of the brightest sunlight any tree has known. I drank and chanted their lives and grew strong.

My sister’s branches shrunk back, and her roots tried desperately to break through to the fresh blood. My chanting became laughter as I beat back every attack she sent. My unlikely dreams of ruling the field might even come true.

Then the humans did something new. Was it simply a flight of fire arrows? An arcane spell? New and explosive technology? I didn’t know, but my sister and I both burst into flame. No amount of blood could put out the fire.

By the time the flames were out, I was reduced to charred roots and a single spire of dead wood. I had no buds to sing even a simple summoning. My sister was similarly broken, her proud strength now nothing.

Every drop of blood in the field was gone, drunk by flames even more greedy than I.

Author’s Note:  This one started as a writing exercise. An online writing group I’m part of meets together, roughly once a week, as many as can manage. Someone will post a topic, and we’ll have an hour to come up with whatever we can manage. It’s a great exercise for simply getting used to turning off that questioning voice inside and just writing, so even if none of the exercises turn into viable stories, I recommend it strongly. But given how frequently the members of the group manage to turn those one-hour starts into complete short stories that sell to a variety of places or key character development pieces for their novels, it’s even better than just an exercise, but a great way to get a story down on paper. I can’t even recall the exact prompt for this one, and I’m sure I hadn’t completely finished it when the hour was done, but that was where the story began. Besides, I love trees, and carnivorous plants are simply cool, so the idea of cruel and carnivorous trees that feast on spilled blood was one I knew I had to finish as soon as it occurred to me! 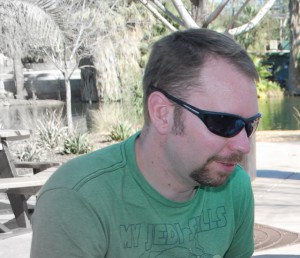 A runner, writer, reader, teacher, and parent, Daniel Ausema has had fiction and poetry appear in many publications, including Strange Horizons and Daily Science Fiction. He is also the creator of a steampunk-fantasy, serial-fiction project, Spire City, which is now entering its third and final season. He lives in Colorado, at the foot of the Rocky Mountains.