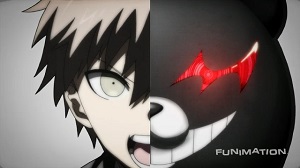 Danganronpa 3: The End of Hope’s Peak Academy assumes familiarity with both with the original Danganronpa and Danganronpa 2 video games (the latter of which was never animated). For the Future Arc this also includes the interquel game Another Episode: Ultra Despair Girls.

Because of this, this review will also assume familiarity with the franchise. Watching either Danganronpa 3 arc will be very difficult for the uninitiated, even if they’ve seen the first Danganronpa anime. The animation team knows their target audience and Danganronpa 3 – Future Arc is a murder filled send-off to a much loved cast of characters, as well as wrapping up the Hope’s Peak storyline.

Future Arc follows Makoto Naegi, the protagonist of the first Danganronpa, who has returned to the Future Foundation to face the music for his actions at the end of Danganronpa 2. Though the focus is on Makoto, and a lesser degree Kyoko Kirigiri and Aoi Asahina, rest assured that all six survivors of the original killing game put on an appearance.

Before the various division heads of the Future Foundation can decide on any punishment against Makoto, their secret headquarters is attacked by a missile-toting helicopter, which causes enough destruction to effectively seal them inside. If that wasn’t enough, their computer systems are hacked, preventing communication with the outside world, and the group of them are gassed unconscious. When they wake, a digital Monokuma appears on the monitor of their meeting room, revealing that he’s trapped them in a new killing game.

The biggest mystery is the identity of the new mastermind since the ones who began the first and second killing games should no longer be (directly) involved, though their legacies may well live on.

The previous two Danganronpa installments relied on individuals being willing to kill a stranger to achieve freedom, even if it meant leaving everyone else to die, but this killing game features a group of people trying to put the world back together after the greatest tragedy that has ever struck humanity. They’re supposed to be the world’s greatest hope, and they all know each other.

So the twist this time is that one of them is a traitor. Each of the fifteen people trapped inside is outfitted with a bracelet that serves a number of purposes. It tells them what their forbidden action is, and then will give them a lethal injection if they do it. More importantly, every two hours the bracelets will knock them unconscious with an anesthetic, with the exception of the traitor, who will then have free rein to kill someone.

Each cycle of unconsciousness will result in someone dying, unless the killer him/herself is killed first.

It’s like being trapped in a lethal version of the party game Werewolf or Mafia.

The mastermind clearly wants everyone at each other’s throats and encourages rampant paranoia. Killing the right person early will save more lives, but killing the wrong person raises the body count and brings horror and despair to the remaining individuals.

Danganronpa has always had a heavy hand in pitting the concepts of Hope and Despair against each other, and the symbolism in having the best hope for the world’s future falling into despair as they murder each other would be interesting if that hadn’t been the reason for the first killing game in Hope’s Peak Academy.

Fortunately, the cast makes up for it. I was concerned that there are sixteen participants listed, and we have just 12 episodes to the Future Arc, but as before, all the characters are distinctively designed and after a couple episodes it’s not hard to tell people apart or remember who they are due to their outsized personalities.

After the first two games the production team thought it would be too much to have another round of Hope’s Peak Academy students killing each other (and by then, inventing another excuse to use the class trial system might be pushing it) so they decided to tie off the storyline with an anime, and I think that was the right decision.

Future Arc follows some of the same narrative beats as the first game, but gets to do a lot of things a game can’t, such as offering multiple points of view. Things can happen simultaneously and stories can unfold without Makoto being in the thick of everything (though he is still very much in the crosshairs of far too many people), which results in earlier than expected reveals of critical information. It’s not enough to tip the reveal of the new mastermind too soon, but the pacing definitely picked up since there’s less of a need to set the stage or for a protagonist to get used to the new normal.

If there’s any fault in the Future Arc it’s that once the mastermind’s hand is revealed it’s a little hard to swallow, and those accustomed to poking out plot holes will likely find several that don’t quite add up.

While the identity and purpose of the mastermind is a nice Danganronpa style twist, the ending relies too much on information that’s been withheld to feel satisfactory, and worse, it removes agency from Makoto in favor of giving the audience some fanservice. Considering how much the poor guy has gone through both from the first game and now the concluding anime series, it feels like the final moment should have been his, and it wasn’t.

As a conclusion to the series, it’s definitely an ending with no leftover plot threads. As a killing game it’s a lot of fun to watch along and try to figure out the traitor. But as a story it can’t pull itself together in the end, and that’s unfortunate since there’s a lot of fun along the way.

It is mostly possible to watch the Future Arc without watching the Despair Arc, and that may have been intentional since fans are more likely to want to see the conclusion of the series than a prequel, but watching Despair does offer more backstory for the new characters, giving the audience additional time to get to know them that the killing game does not offer.

Episode 12 by the Funimation count is the Hope Arc, which closes off both the Future and Despair storylines and should only be watched after the end of Future. In fact it is the conclusion of the Future Arc and is not skippable.

Minuses: fanservice when it gets in the way of the story, unsatisfactory red herring takes up part of the early plot, mastermind’s plan and real goal is needlessly complicated