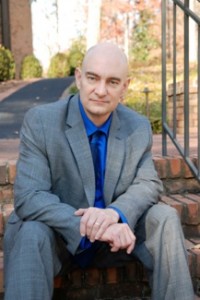 Lou Anders is the Hugo Award winning editorial director of the SF&F imprint Pyr Books, a Chesley Award winning art director, and the editor of nine anthologies. He has also been nominated for six additional Hugo Awards, five additional Chesley Awards, as well as the PKD, Locus, Shirley Jackson, and three World Fantasy Awards. His first novel, Frostborn, book one in a three-book middle grade fantasy adventure series called Thrones and Bones, will be published in August 2014 by Random House’s Crown Books for Young Readers.

This past Labor Day weekend was my very first time attending Dragon*Con as a publishing professional, and really my first “real” time at all. I say first “real” time because I went three years ago for a single day to see Jetse de Vries, who was there at the time with Interzone. I spent most of it with him at his table, watching the crowd pass him by for the guy next to him installing vampire teeth (at $60 a pair, using the same dental instrument and, seemingly, not bothering to clean it between applications). I left with the (mistaken) impression that it was a weird goth con with nothing to offer the book trade.