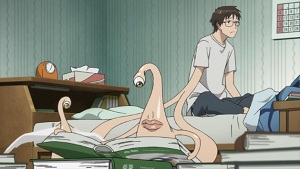 Though I have a lot of affection for Parasyte, my experience is colored by having been a huge fan of the manga for years. I recognize that adaptations need to make changes and that doesn’t bother me. There are some things that I think were improved by having done so, but at the same time, there are others that absolutely did not bother me in the manga that just felt flat when translated into the animated medium.

Parasyte is the story of Shinichi Izumi, a high school senior who is the victim of a failed attempt by a parasyte organism to take over his brain. Instead of burrowing into his brain, the parasyte landed in his hand and matured partially up his arm. The result is that he and Migi, the parasyte, are two sentient beings that share one body, with Migi controlling Shinichi’s right hand and arm while he is awake.

Normally parasytes gain self-awareness when they take over and mature in their host’s brain, and at that time they gain the urge to feed on their host’s species as prey. Needless to say, when the parasytes first appear, it looks like there’s a rabid ax murderer on the loose leaving body parts all over the place, but with time the parasytes learn to clean up their act to avoid drawing attention to themselves and their feeding grounds.

The parasytes are every bit as intelligent as humans without being entirely human themselves. They do not have emotions, relying on what is practical and what is instinct, and they are able to distort the parts of the body they assimilate into a living weapon (so when parasytes fight it looks like the formerly human heads of their hosts turn into bladed tentacles). But despite being powerful predators of humanity, they have a great deal of difficulty in understanding how human behavior works, which is a debilitating weakness for creatures who rely on disguise to avoid attention.

This is the crazy reality that Shinichi finds himself grappling with when everyone else in Japan doesn’t have the slightest idea that there are real monsters going around eating people. The only reason he knows is because of Migi, who is both friend and foil. Though Migi possesses the cold logic of parasytes, he also understands that if he is to survive, he must convince his human host to work alongside him, which results in Migi having a better understanding of how humans tick. At the same time, Shinichi teaches Migi about compassion and how complicated humans are when emotions and practicality intersect.

It’s an interesting play between them, with Migi being willing to give Shinichi possibly false reassurances simply because he knows it will make him feel better, and Shinichi explaining to Migi why using a wall of people as a shield against another parasyte is an unethical tactic. Arguably the relationship between Shinichi and Migi is really what makes the show, as both of them gain the understanding and empathy for each other’s kind.

The themes in parasyte are thoughtful; about humanity’s place in the world, about each species’ right to exist, about the nature of coexistence and who gets to set the rules.

But the pacing is off, and this is where I don’t like the anime so much.

Parasyte follows the manga surprisingly closely, with many shots being drawn from the same angles as the original panels. Its devotion to following the source material even results in episodes where the biggest moment happens in the middle of the episode, or shortly after the beginning, and I can’t help feeling that part of the reason is a lack of desire to trim or expand the original story.

This problem will likely be mitigated for future viewers who can watch as many episodes as they like in one sitting, but waiting a week between simulcasts made the pacing annoying.

I also think that Parasyte loses a bit of its edge from the sanitization needed to get it on TV. The first episode is fairly faithful to the manga and left quite a bit in (though with minimal blood), but after that point most of the gore is off-screen with characters reacting to it.

While I’m rarely a fan of gore, I’d argue that it’s important in Parayste because one of the key points is how much of what makes us human doesn’t make sense, and our sensitivity to what a predator instinctively does in nature is a part of that. The gore isn’t created because the parasytes are sick bastards. The gore is created because the parasytes are going about their business and doing what’s most practical (for them). By not showing this, the anime’s impact is blunted in its ability to widen the gap between what the audience tells itself it believes, and what the audience actually believes.

But there are good parts to the adaptation too.

There weren’t a whole lot of changes made, but when the anime did deviate from the manga, the show was noticeably stronger. Yuko was promoted from a one-off character to an actual member of the supporting cast, which paid off in the Shimada arc since the viewer had additional emotional investment in her survival. And the anime made Kana much more sympathetic, taking a character I really didn’t care for and making her someone worth worrying about.

The manga was written in the late 80s/early 90s in the pre-cell phone era, but Parasyte for the most part makes the transition to modern day well. School uniforms and hair styles are updated and a scene where camera film needed to be destroyed was easily revised to where the camera itself was taken apart. The only part that really didn’t work and too easily telegraphed that something bad was going to happen was when a character forgot her cell phone, whereas there was no cell phone to worry about in the original.

I think the anime has less to offer those already familiar with the manga, but for those who have never experienced the manga in the first place, it’s a good entry point with substantially less gore for those sensitive about on screen violence. There really isn’t anything else quite like it, particularly if one does not mind mulling over the nature of existence in the same series as human-chomping monsters.

Minuses: strange episode pacing with oddly chosen cliffhangers, in a couple cases the update from the 80s to present day results in characters being stupid in order for plot to happen, music score is uneven with some scenes have emotionally jarring musical selections

Parasyte -the maxim- is currently streaming at Crunchyroll and is available subtitled. Sentai Filmworks has licensed this for eventual retail distribution in the US.