Most nights the alley behind Beamon’s Bakery is just an alley.

Some nights a transient clears away the broken glass, the random detritus, to squat for the night. Setting up camp here has its own rewards. The warmth that seeps through the bakery walls and through brick facing chases away the chill, but not the ghosts. This is the drawback, you see. The alley is never as vacant as it may seem at first, never as lonely as one may wish. The price of physical warmth is the chilling of your soul.

On the ninth night of November, the banshee chases away the transients, the curious, the ignorant, and claims the alley as her own. She returns in disbelief of the injustice, to recover her beloved.

If you pay attention you can see the faded outline of a body in front of the dumpster. As the hour draws closer, the details grow clearer, and the body all but materializes. A sharp sound cracks open the silence. The bud of blood on his white apron blossoms and spreads across his chest. He gasps for breath and you can even see the steam rise in a clotted cloud about his head. His lips are stained red by death’s kiss.

They say it was her son, Mikaheel, who worked at Beamon’s. Mistaken for a burglar, for reasons no one can comprehend, he was shot by an officer while emptying the trash.

She relives the day, that hour, when her entire world was remade, when she wished to no longer be a part of that world.

“He is just a baby,” she sobs into her hands as she kneels next to him. “My baby. Only seventeen. He hasn’t even lived yet.” She doesn’t feel the cold hard pavement against her knees, the hands on her shoulders, the arms that lift and carry her away.

There are many stories about her. Some say she died from grief. Others believe that she took her own life, that she might join her son in death. But the truth is something much different.

Her fury would not allow her to die, nor live. It consumed her flesh but not her horror. This is what you see on this night in the alley. This is who you feel when you come too close.

The banshee kneels before her dead son. Her flashing energy glows blood red. The air grows hotter than the ovens in Beamon’s. Then comes the palpable sound…the thunderous rending of her heart. It is the sound of the sky ripping and the Earth crumbling away. She keens like a broken dog, ropey braids whipping around her head like bird’s wings.

Her grief permeates the hood. All mothers within hearing distance share the same nightmare, her horror. Her voice, like daggers, cleaves the night. Those caught within her looping nightmare claw their way back into the waking world. Hungry for their next breath, hearts pounding, they cry out the name of her son, “Mikaheel!”

On this night, the alley is an archive of injustice and the banshee is the chronicler.

Author’s Note: The unjust violent death of Michael Brown at the hands of a police officer was the specific impetus for this story. I tried to imagine what his mother must’ve been feeling upon learning about her son’s death. This wasn’t difficult because I have a son as well. I tried to impart the feeling of rage and horror I, any mother, would feel upon learning that her son was taken away in such a violent horrific way. 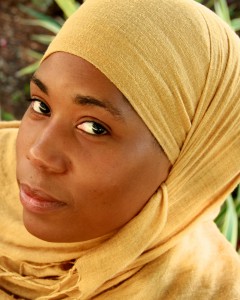 Khaalidah Muhammad-Ali lives in Houston, Texas with her husband and three children. By day she works as a breast oncology nurse. At all other times she juggles, none too successfully, writing, reading, gaming and gardening. She has been published at Escape Pod, An Alphabet of Embers, and People of Color Destroy Science Fiction. She’s also penned a novel entitled An Unproductive Woman which can be found on Amazon. Khaalidah is also a narrator and you may have heard her narrations at Strange Horizons, and all four of the Escape Artists podcasts. Khaalidah is guest editor for Artemis Rising 3 over at PodCastle and is also guest editing Truancy Magazine‘s fourth issue. Khaalidah is on a mission to encourage more women and POC to write and publish science fiction stories. Of her alter ego, “K” from the planet Vega, it is rumored that she owns a time machine and knows the secret to immorality. You can catch up to her posts at her website, www.khaalidah.com, and you can follow her on twitter, @khaalidah.

7 thoughts on “DP Fiction #21: “The Banshee Behind Beamon’s Bakery” by Khaalidah Muhammad-Ali”