Pseudopod is the weekly horror podcast edited by Shawn Garrett and Alex Hofelich.

In February Pseudopod once again participated in the Artemis Rising theme across the Escape Artists podcasts, publishing horror stories by women (including some originals picked out from a special slushpile just for this purpose).

Pseudopod publishes episodes weekly, with occasional Flash on the Borderlands episodes that collect 3 similar-themed flash stories for a single episode, for a total of 63 stories published in 2018, by my count.

written by David Steffen Pseudopod, the weekly horror podcast edited by Shawn Garrett and Alex Hofelich, has now been running for more than ten years, an incredible feat for a podcast, which often fade away after a year or two. 2016 marked some major moments in the podcast’s history–they increased their pay rate for flash … END_OF_DOCUMENT_TOKEN_TO_BE_REPLACED

Pseudopod has now been running for nearly 10 years, which makes it an old fogey in terms of fiction podcasts. 2015 marked a major moment in the podcast’s history–the podcast increased the amount that it paid its author’s to what is considered in the industry to be professional rates. This is very exciting because not many podcasts have been able to afford to do this. I hope this will bring in even better stories by an even broader set of authors, and that will hopefully help give the fiction podcast industry more respect when it comes to awards and such honors which have typically looked over podcasts. 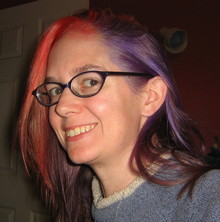 Mur Lafferty is one of the pioneers of podcasting – founder, producer, host, voice, editor, author. She has won the Parsec Award several times. Her Shambling Guide comedy-horror series is available from Orbit.

Another year, another round of Best Of lists.

Pseudopod, and the other Escape Artists casts had a bit of a crisis to overcome this year–they realized that although they had a great listenership, only 1% of the listeners donated, and it wasn’t enough to keep the publications afloat. The good news is that when they revealed this there was a strong reaction to add subscriptions–if you read this and you like the cast, consider adding a subscription.

And I thought this was another strong year for Pseudopod, and I’m not just saying that because two of my own stories were published during the year. Since I don’t consider my own stories for Best Of lists, I’ll just mention them briefly here. “Meat” is the story of a domestic housebot doing the best he can under difficult circumstances. “Helpers” is a special dark Christmas episode.

Pseudopod published 58 stories in 2013, of which these are my personal favorites.

Just a couple quick links for you!

My Christmas horror story “Helpers”, which originally appeared in One Buck Horror 3 is now reprinted in Pseudopod.

I have guest blogged at Daniel Wallock’s site here.

Not too much to say in preamble to this list. Pseudopod is awesome as ever. You should listen to the show. Here’s some of my favorites that you can check out.

Just a quick sale announcement, I sold my 10th short story yesterday, “Meat” to Pseudopod, to editor Shawn Garrett. It will be my third appearance on Pseudopod, and my second Pseudopod original. It’s a horror SF flash fiction story about a robot domestic helper who is trying very hard to complete a few simple tasks under adverse conditions.

Another year has passed, which brings us to another year’s worth of “Best of” lists. First up, is Pseudopod, the horror branch of the Escape Artists podcast tree. Pseudopod was on hiatus for the first few months of 2011, but they have been publishing stories at a steady rate again since March, and there are plenty of stories to make a list from.

On November 9, 2009 I posted my very first “Best Of” podcast list, the Best of Pseudopod, which was based on Pseudopod episodes 1-167 and flash episodes 1-22. Well, I’m still listening and still enjoying myself, so I figured there’s no reason I can’t make another list. I expect this will become a yearly thing, and will usually cover everything within 1 calendar year. This one will be a tiny bit different because a bit more than a year has passed since my last, which is why this is 2010+. It will cover episodes 168-219, 60 stories total (because there are a few episodes with more than one story).