He finds a forest clearing on a planet of perpetual night in the two hours out of a thousand years that stars spread twinkling across its sky. It’s pure luck that he lands there on his random planet sampling. It’s the most beautiful, peaceful, ethereal place that he has ever seen.

There are no people on this planet. It will never be inhabited. Life evolved to little more than trees (if they are trees, those branching things) that get their food from the soil beneath and what sun that struggles through the clouds. Rocky outcrops ring the clearing in sharp relief against the sky. Beneath the starlight, he forgets about his life and loneliness.

He’s still alone here, but it’s different in the fresh unsullied alien air that fills his lungs as he rests between untrodden grass and unwitnessed skies, different from spending each evening alone in a busy, crowded city, full of strangers he’s too shy to talk to and too scared to try and understand.

Clouds crowd back across the gap, shrouding starlight behind their familiar shield. Darkness falls to rule the clearing. Peter knows it’s time to leave.

He logs the coordinates on his device.

This place would be perfect.

The next evening, he tweaks the saved coordinates to arrive some distance away. His office cubicle fades from view. And there he is, his younger self: gazing spellbound at the stars. There’s no need to bother him. It might risk a paradox thing. But it’s nicer, all the same, having someone else around. He smiles.

He pops up near the tree line. Work-exhaustion pains his face. He sees his two selves in the distance and thinks it might be nice to greet them: just to have someone else to chat to, because people do that after work. But nervousness still stays his feet. Tricky things, paradoxes, and knowing how to talk to people.

He looks around for the fourth. There’s no one else there. Yet.

“Hi,” says Peter shyly to the third when the latter turns to search for him. “Tough day at work?”

His other self blinks, and tries a smile. “Yeah.”

His memory warps and changes. He remembers this exchange from the other end. It feels exceedingly, self-consciously redundant. They stop talking, and rest in the quiet. Each other’s company is enough.

But the silence has been broken, and each time he gets more daring. Tentative greetings turn to conversations, uneasy handshakes to awkward hugs. It’s been so long since he’s talked to someone, too long since he’s touched another person. They’re not quite other people, here, but he can still pretend. If they close their eyes, they can all pretend.

They don’t talk about their lives because they’re all of them living the same one. Futures talking to pasts and sharing tales… that makes bad things happen.

But they can talk about this place that they have taken for their own. They map out constellations, invent stories to explain them. They study the alien trees and shrubs and give them cool scientific names. They gather piles of broken rocks and build rough forts upon the grass, then split into teams and play at sieges, fighting off invasions of themselves.

His memory rewrites itself in overused palimpsest till there’s nothing left he knows for sure and all his past becomes a blur. Events back home grow indistinct in the dullness of their repetition. His one surety is this place, his one joy each night’s respite in the comfort of its familiar faces.

He never steps into the same crowd twice.

Someone brings fireworks – he can’t remember who, but he recalls setting them alight and shooting colour into the sky in bursts of fire that draw applause from the homogeneous crowd below.

He can barely remember his original visit: the darkness, the quiet, the mystified awe. He recalls stepping instead for the first time into the midst of a roaring party, music blaring and people dancing beneath strings of lights and hanging lanterns: people like him, who welcomed him warmly and made him feel like he belonged, people who understood him, people who liked him, people who knew and bore his name.

He brings a guitar and an amplifier and starts strumming a favourite song. The next day he brings a keyboard; then a drumset, bass guitar, mikes for singing and backup singing.

He doesn’t sing very well. It’s okay. No one in the audience sings any better.

The live band is belting out upbeat covers of emo band The Cutting Age. The audience loves it: jumping and screaming lyrics, and he smiles at their energy as he stands at the edge of the crowd with a sandwich in his hand.

A drunk bumps into him and slurs out an apology. As he stumbles away, he remembers doing that.

But it’s all a fragile, delicate balance. It’s a miracle they have lasted here this long. His memories are a blur, his pasts a confusion, his body a shifting, changing thing of scars and bites and injuries as his selves change each other’s histories and history changes them.

He thinks it’s enough proof of how this time travel works, and the clearing is now too full of him. The party can never get bigger than this. There’s no more space. The forest is impenetrable. He doesn’t know what lies beyond. His next week here might be the last; perhaps this night might be the last.

He thinks of once more spending each night in the void of his room with that void in his heart, and despair drives his feet to walk him to the spot where he made his first excursions.

He doesn’t waste time thinking when his fourth self materialises. He tackles him, grabs the space-time device, and crunches it firmly beneath his shoe and the open-mouthed horror of his younger face.

The music cuts silent. The multitude winks out. He feels the relief of a thousand memories erased from the worn-out tape of his mind. He vanishes too, with his final act of destruction, and a cold wind sweeps the empty grass.

There are four people in a clearing that has not yet known a crowd.

“Hi,” one says shyly to another when the latter turns to search for him. “Tough day at work?”

The other blinks, and tries a smile. “Yeah.”

He doesn’t know it yet.

But he will never be lonely again.

Author’s Note: Back when I was working in NYC, I attended a free concert in Central Park by the New York Philharmonic. It was crowded, lively and slightly surreal with the field full of shadowed human figures moving around to music beneath the night sky. I had the stray thought – what if all of them were the same person? Whereupon I went home and wrote out the first draft of this all in one go. 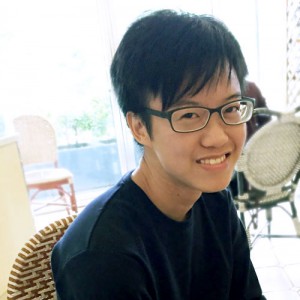 Davian Aw’s writing has appeared or is forthcoming in Daily Science Fiction, Stone Telling, LampLight and Star*Line. He also wrote roughly 240,000 words of Back to the Future fan fiction as a teenager and has never been that prolific since. Davian is a double alumni of the Creative Arts Programme for selected young writers in Singapore, where he currently lives with his family and a bunch of small plants.