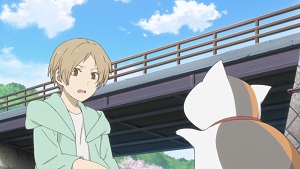 Natsume Yūjin-chō Roku is the sixth season of the long-running series (also known as Natsume’s Book of Friends). I previously reviewed seasons 1-4 here and season 5 here.

Natsume Yūjin-chō follows the ongoing misadventures of teenage Takashi Natsume, who has the ability to see youkai (spirits out of Japanese folklore) when most people cannot. Because the series is episodic, it’s generally easy to slip into the middle with minimal knowledge of what has happened in the past, but a few of Roku‘s episodes work better knowing Takashi’s (and his grandmother Reiko’s) history.

Takashi has met other people who can see youkai, and the sixth season features two two-part episodes dealing with exorcists and their relationships with their youkai familiars. Most humans who can see youkai find work in exorcism, which is a practice Takashi dislikes. Like his grandmother Reiko, who wrote down the names of youkai in what became the Book of Friends, he prefers to settle things on more humane terms without imprisoning any wayward spirits.

But he is friends with Natori, who is an exorcist, and because of that friendship Takashi becomes involved with couple incidents involving old familiars and how they behave when the human they were bonded with has passed on. Takashi also has to deal with the knowledge that the Book of Friends is not something he can share (since we learned it was a forbidden practice last season). This creates a real fear in him that he can’t let Natori know the truth about what he’s carrying, while at the same time Natori is aware that there is something Takashi is protecting that he will not share with anyone.

It was a surprising bit of story advancement in a series which largely works as a slice of life with youkai. And that’s not the only revelation, as Roku teases more of Takashi’s heritage, but this time in regards to a different ancestor we have not yet met.

The remaining episodes mostly run with the usual formula of Takashi encounters a youkai with a problem or who is causing a problem. This is not a strike against the series, as that’s long been the heart of the show, but it doesn’t break much in the way of new ground.

There is one episode worth calling out though, for being the first genuinely creepy episode of Natsume Yūjin-chō. Despite being a series about youkai, it’s usually tame with its imagery. Even if the characters are startled, they’re rarely meant to be terrified. “Nitai-sama” takes its cues from more horror oriented fare though, where the youkai is known to be malevolent and takes its time in revealing itself. It’s probably an insufficient scare for those used to actual horror, but the episode is definitely more intense than the usual for Natsume Yūjin-chō and especially will not go over well with people who have a fear of dolls.

Roku isn’t going to win anyone over who isn’t already watching, but for those who are, it’s a surprisingly forward look at potential stories to come. Now the question is, will there be a Natsume Yūjin-chō Nana (Seven)?

Pluses: more of the same low key storytelling, plot development for Takashi, lots of lovely stories about the bonds between humans and youkai

Minuses: more of the same low key storytelling, season is on the short side, story doesn’t really do anything with the potential complications that come up