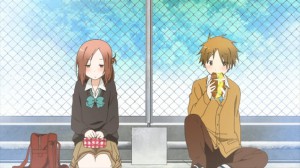 One Week Friends started off as my one must-watch show of the spring season, despite having only the barest of speculative elements (in that KaoriÃ¢â‚¬â„¢s malady is not a real world condition). Though the rest of the series never again hits the high of the first episode, it remains an enjoyable watch throughout.

Warbound is the third book in Larry Correia’s Grimnoir Chronicles, preceded by Hard Magic and Spellbound. It takes place in a fantasy alternate-history 1930s. The branch in history took place in the 1850s when a magical force called The Power chose some subset of humanity to draw on its magical resources and become superpowered to give them the power to fight against the monstrous Pathfinder that eats magic and twists that magic to its own devices. And the Pathfinder itself is only an advance scout of its even more powerful master.

Another Hugo category, this one for Hugo Dramatic Long Form, which usually means feature films. Three of them are repeats from the Ray Bradbury award that I’ve already reviewed this year, so those three are pretty much the same review text. I look forward to these every year because I don’t have time for a lot of movies, but I can use this as a quick-start guide for the year’s notable movies. Since movies are such a popular form, the category gets a ton of votes, so is an even better representation of SF fan tastes than most. I’ll start by saying I’m not a typical fan of vampire media. I dislike vampires as love interests. What I like is shooting/staking/killing vampires. In short, I like the hunters.

I first heard about Vampire Knight several years ago. It was about a high school where there is a Day Class for humans and a Night Class for the vampires, which at the time I thought was a neat twist. (Vampire Knight beat Twilight to market by a year.) Yuki Cross is a school Guardian charged with monitoring the Night Class to make sure they behave and do not prey on the humans in the Day Class, but unsurprisingly for a story aimed at the young female audience, she quickly finds herself torn between two boys: the immortal pureblood vampire Kaname Kuran and her vampire hunter foster brother Zero Kiryu.

And here’s the graphic story section of my Hugo review. This is one I look forward to every year because it’s kind of a wild card. I never know what to expect out of this because I don’t really follow graphic stories at all. Last year I got to read Schlock Mercenary for the first time. This time I get to read Girl Genius for the first time.

And the last of the shorter categories for the Hugo this year, covering stories from 17,500 to 40,000 words. The longer categories are often misses for me because I feel they have a lot of word bloat, but when I do like one of them they have so much space to grow.

The Princess and the Pilot is a sweet film about a noble girl betrothed to a prince and the pilot who has to ferry her through enemy territory to get her to safety. Taking place in an oceanic world inspired by the 1940s, the movie has an unusually modern setting for a star-crossed love story involving class systems and royalty.

Now that the Hugo packet is finally out, I can finish my reading of the Hugo nominees.

We continue our author spotlight with this months featured author Damien Angelica Walters. Damien is a favorite Friday featured author. Her work has appeared 7 times at Daily SF, including this monthÃ¢â‚¬â„¢s finishing tale.