Hello everyone! Greetings and I hope that you and your family and friends are well, or as well as can be expected.

For the last several years, Diabolical Plots has opened for a regular submission window every July. I’ve found that having a single month every year helps me to compartmentalize the effort involved in reading the submission queue–because I find it exhausting and time-consuming, so I just schedule myself one very busy month where I get very behind on everything else, and then I go back to normal.

This year, because of COVID-19, I do not have the time to spare to handle a submission window properly–I have a full-time dayjob and no childcare, and as much as I dislike changing an established routine like this, I don’t see any way that I could handle the time and effort of a submission window in July.

On the bright side I’ve always kept a pretty long publication schedule between acceptance and publication, which does come in handy at a time like this–I already have the selections made in the 2019 submission window lined up to publish without interruption through March of 2021, so it will be almost a year before any possible disruption to the publication schedule will occur.

When will the next submission window be? I don’t know! Depends on, among other things, when I have childcare again. I will have to revisit that question later as more information is available.

In the meantime I will be doing the best I can trying to handle what I can handle–best of luck and best of health to you and yours!

For most of its existence, Diabolical Plots has had one person, me, behind the curtain, with the occasional nonfiction contributor and of course the fiction writers. In the last couple of years we have started to shift that policy and have taken on first readers (aka slushreaders) who help out during the submission window to help narrow down the huge submission queue (1400 submissions in our 2019 window) to something more manageable to find the final 24 selections.

One of the first readers this year was Ziv Wities, who was a very prolific reader of the stories and who had a good eye for a story (in my opinion, of course). Since then, he has volunteered to take on extra work at Diabolical Plots as well, including helping edit the individual Year Six stories, helping find a new artist for the cover of this year’s Long List Anthology, and other things along those lines. We are currently talking about other things he could do, which we will surely announce in due time. You can take a moment to congratulate Ziv on Twitter at his handle @QuiteVague or anywhere else you see him online!

Diabolical Plots was open for submissions once again for the month of July, to solicit stories to buy for the fourth year of fiction publication.  1432 submissions came in from 1066 different writers, of which 122 stories were held for the final round, and 24 stories were accepted.  Now that all of the contracts are in hand I am very pleased to share with you the lineup.

There a few names in there that Diabolical Plots has published before, there are some others whose work I know from elsewhere but who are making their first DP appearance in this lineup, and there are yet others that I didn’t know before this–I like to see a mixture of these groups!

August 2020
“Finding the Center” by Andrew K. Hoe
“For Want of Human Parts” by Casey Lucas

October 2020
“A Complete Transcript of [REDACTED]’s Video Channel, In Order of Upload” by Rhiannon Rasmussen
“Are You Being Severed” by Rhys Hughes 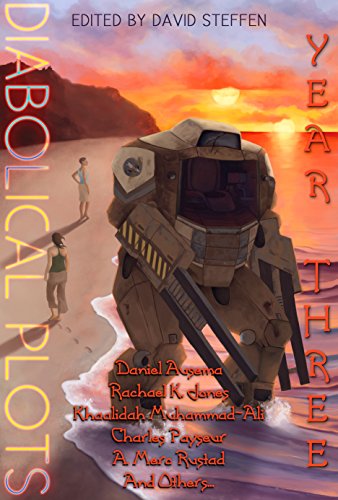 Note the wonderful cover art, an original illustration by Amanda Makepeace, the same artist who made the awesome fox cover art for The Long List Anthology Volume 3 in December of last year.  She illustrated the story “For Now, Sideways” by A. Merc Rustad, and she did a wonderful job with it.  I love how a good illustrator can tell a story with an image like Amanda’s done here, how your eye is drawn to different parts of the image that imply the conflicts and resolutions of the story.  Cover layout was done by Pat Steiner, who has done all of the anthology covers for Diabolical Plots and continues to do great work.

Thank you, and have a happy weekend!

Diabolical Plots was open for submissions once again for the month of July, to solicit stories to buy for the fourth year of fiction publication.  1003 submissions came in from 720 different writers, of which 25 stories were accepted.  Now that all of the contracts are in hand I am very pleased to share with you the lineup, which will start as soon as the Year Three stories have wrapped up in March.

This year I think the overall submissions were more on-target to my peculiar tastes than ever.  Emphasis on the weird, with a lot of great stories that involve religion without preaching or demonizing it.  I am very excited to share these excellent stories with the world.

Since I accepted 25 stories instead of 24, there is one month that will have three stories (which I’d like to see as a regular thing if the recurring funding is there for it).

May 2018
“The Efficacy of Tyromancy Over Reflective Scrying Methods in Divining Colleagues’ Coming Misfortunes, A Study by Cresivar Ibraxson, Associate Magus, Wintervale University” by Amanda Helms
“Graduation in the Time of Yog-Sothoth” by James Van Pelt

September 2018
“Glass in Frozen Time” by M.K. Hutchins
“The Fisher in the Yellow Afternoon” by Michael Anthony Ashley

November 2018
“The Memory Cookbook” by Aaron Fox-Lerner
“The Coal Remembers What It Was” by Paul R. Hardy

December 2018
“The Hammer’s Prayer” by Benjamin C. Kinney
“For the Last Time, It’s Not a Ray Gun” by Anaea Lay

Just the briefest of notes:  fiction sales to Diabolical Plots now count as qualifications for writers toward joining the Science Fiction and Fantasy Writers of America(SFWA).  Very excited by this news!

This applies to all the past fiction accepted here, as well as the fiction for the current submission eindow open through the end of the month.

Diabolical Plots is open for submissions!

See the guidelines for more details.

I know some people don’t like award eligibility posts, thinking that they’re desperate pleas for attention.  As a reader, I like them because if I am behind on my reading they are a good place to catch up on the year’s published stories of another author, and as a writer to look back  at my own.  I don’t have any illusions that anyone is going to nominate me, and that’s fine–there are so many amazing people doing incredible work every year.  But I still think an award eligibility post is worthwhile, and if you don’t think so, then you should stop reading now.

This year, since I started selecting and editing fiction for Diabolical Plots, I’ll list the Diabolical Plots work first and then my fiction writing as a separate section.  For the purposes of this list I am thinking of the Hugo and Nebula Award categories because those are the awards I’m most familiar with.  Other awards have other categories that might be suitable.

People ask once in a while whether the Submission Grinder is eligible for a Hugo or Nebula.  It is not, because there are no categories that suit it for those awards.

2015 was the year the Long List Anthology was published, but it is not itself eligible.  Neither award has a category for standalone anthology (though I believe the Locus Award does), and all of the stories were first published in 2014 so are ineligible.  As the editor I would be eligible for the Hugo Award for Best Editor, Short Form for which I edited that anthology as well as the first ten stories of Diabolical Plots.

Diabolical Plots opened for fiction submissions for the month of July, one story per writer for the submission window.  During that month 425 valid submissions arrived in the slushpile.  59 stories were held for a second look.  13 stories were purchased.  Both rounds of the process were judged entirely by me, and author names were hidden from me until the final decisions had been made, so the stories had to stand for themselves.  Here are the story titles and authors for that year of purchases.  I am very excited to bring these stories to readers.  I hope you enjoy them as much as I did!

June 2016
“The Weight of Kanzashi” by Joshua Gage

September 2016
“Do Not Question the University” by PC Keeler

October 2016
“October’s Wedding of the Month” by Emma McDonald